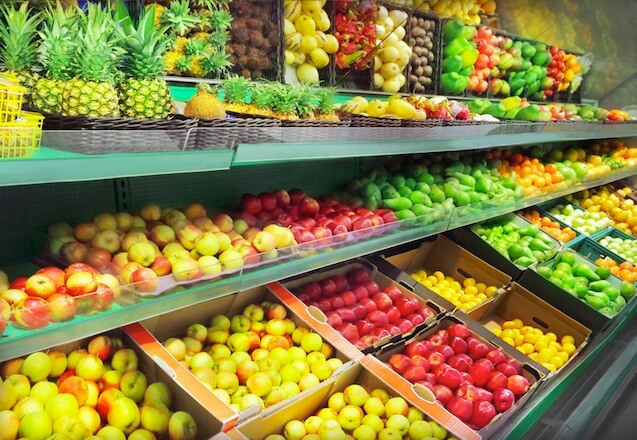 James Lileks’ Bleat this morning got me thinking about this “food desert” idea that the First Lady has been talking about.  Instapundit had a funny comment about grocery shopping in his local Federally-designated food desert the other day, which was the first I’d heard of the USDA’s interactive map of our produce-free arid zones. Well, I decided to check out the local food deserts for myself. Looking first in my home county (Blount County, Tennessee), I was shocked to find a giant food desert right at the doorstep of my church! In fact, our old sanctuary building is inside the desert, although the new one across the street has escaped this lack of privilege. If you look at the first satellite map, the green region is our food desert. What are the red circles I’ve added, you’re wondering? Don’t get ahead of me, now. Does that look urban? Don’t laugh — next to the farm there is a dense clustering of houses surrounding the golf course! Now, as a farm boy, I find all of this is too urban for me, but I doubt it would strike most people that way.

Since it’s “urban” and “low-income” (The golf course community isn’t the only neighborhood here—there are some poorer spots here and there), there must be a “supermarket” within one mile. So why isn’t there a gap a mile wide around each of the grocery stores here? Because the USDA is measuring the distances from the “centroid” (think center-of-gravity) of the census tract. Since that is farther than one mile from the stores, the whole tract is counted as too far from a store.

Here is another reason the approach doesn’t make sense to me: Why are there different distance criteria for “urban” and “rural” zones? If a country boy like me has “access” to a store within 10 miles, why is a city slicker restricted to traveling only one mile? I suspect it comes from the truly urban mindset that you don’t use a car to get anywhere and that a mile is as far as you care to walk.

But is that reasonable? Look again at this “urban” zone. Where do you think you’ll get on foot? To work? To school? Church? Everybody has a car. I looked up the statistics with the same USDA map: there are 7,915 people in this tract, grouped into 3,238 “housing units.” Of these, 51 housing units have no “vehicle access.” That’s 1.6% of the houses without “access” to a car. We don’t have buses here, and those few without vehicle access aren’t going to get anywhere by walking, so somebody has to give them a ride to get to work or school unless they’re an elderly shut-in who rarely leaves the house. In that case, I guarantee someone is helping bring groceries too. It’s not like these people are able to walk to a 7-11 and stock up on Cheetos. They’re being driven to get food.

Now that we’ve established that nearly everybody has a car — and even more have access to a car — how hard are those grocery stores to get to?

Here is an overview of the streets. William Blount High School, in the far western edge, is the most remote part of the tract. If you want to go to Kroger, Google Maps says it’s 3.7 miles away and will take you 7 minutes. Or, if you decide that’s too awfully hard for you to access, you can just go to Wal-Mart, which will take you…5 minutes to drive the 2.6 miles. Here’s my take on the whole project: