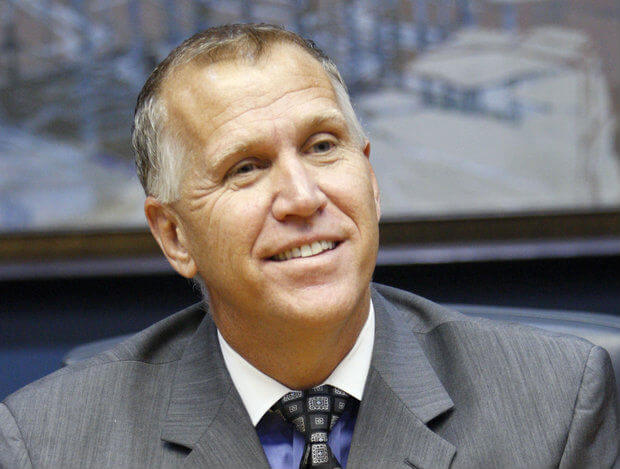 But is that the case? Not in North Carolina.

Rubin claims that Tillis is the most electable candidate and that everyone should have supported him, including Senator Rand Paul and Senator Mike Lee, both of whom endorsed Brannon, an obstetrician from Cary. But this is far from the truth. According to the RealClearPolitics average, in a one-on-one matchup between Tillis and Democrat Senator Kay Hagan, Hagan would win 43.3 to 42.5.

While that’s close, Hagan didn’t poll as well against any of the other Republican candidates in the field—candidates like Baptist minister Mark Harris and Army nurse Heather Grant, as well as Brannon, all of whom are to the right of the establishment candidate. In an election against Hagan, Harris wins 44 to 40; Grant takes her with 43 to 39; and Brannon wins 42 to 40. The rest of the not-so-well-known candidates beat her by 1 point.

But not Tillis. He loses. Yet, the establishment has crowned him the “most electable” candidate. Does that make sense to you?

In addition, Tillis had to move to the right to draw votes away from Brannon and the others. Brannon and Tillis had similar high favorability ratings (as did Harris, which hurt Brannon). Both men were embraced because of their conservative ideas. Tillis was forceful about the fact that he was heading up a conservative revolution in North Carolina. The messaging was hardly a loss for the Tea Party.

So why did Brannon lose?

The primary reason is money. Karl Rove and the Chamber of Commerce pumped in $2.5 million into North Carolina. Voters saw far more ads for Tillis than Brannon or Harris.

The second is that there were too many people in the field. All seven of the candidates to Tillis’s right added up to 54 percent of the vote. Once again, hardly a ringing endorsement of the establishment. Also, according to Public Policy Polling, if there had been a runoff between Tillis and Brannon, it would have been very close. So close that the establishment was quaking in its boots. They didn’t want to see another Ted Cruz-like victory.

But they can thank Harris for keeping that from happening—as well as Brannon himself.

While Brannon had good favorability ratings, so did Harris. And the more people got to know Harris compared to Brannon, the more they turned toward Harris—or settled for Tillis, who came across as conservative and measured in the last debate. Brannon didn’t fare as well in that forum, and this is a lesson the Tea Party—and conservative candidates in general—can learn.

During the debate among Brannon, Harris, Grant, and Tillis at Davidson College on April 22, Brannon came across as impersonal—an academic who could only quote the Constitution. While people cheered for his ideas, some people were put off by his approach. In a piece I wrote at The Federalist, I compared him to a biblical scholar who can’t seem to engage with people—he can only quote Scripture at them.

As I listened to Brannon respond to questions with citations of article, section, and clause from the Constitution, I just shook my head. He reminded me of my days in the ministry and debates with fellow Christians about the best way to evangelize. There was the “Declare the Truth” crowd, and then there was the “Build Relationships” crowd.

I have to confess that back then I was more of a quote Scripture, chapter and verse type. I’ve learned a lot since then. Connecting with people is what’s important. Touching their lives. Entering into their world and engaging with them on a personal level. Talking to them in a real and personal way. That wins converts. Not quoting Scripture. Or the Constitution. That doesn’t mean your message is watered down. It just mean that you’re communicating it in a way that inspires and motivates people. That’s how you make ideas real and principles personal.

Brannon’s approach caused some voters to turn away from him to other candidates, particularly Harris. They didn’t reject his message or the Tea Party platform. They simply wanted someone who connected with them.

We shall see how it pans out in North Carolina, but to think that all is well because the establishment has won is folly. It’s going to be a hard fight against Hagan. My hope is that the Tea Party and conservatives will support Tillis, as Senator Paul has done, so that we can help Republicans take back the Senate.