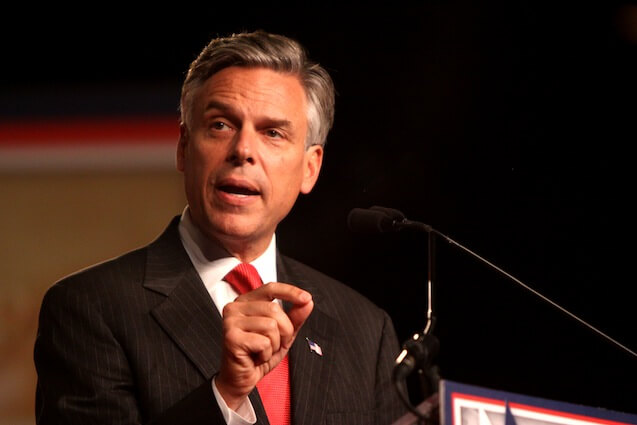 How’s this for the saddest sentence one could construct in modern American life?: Larry King interviewed Jon Huntsman on Ora.tv yesterday. You know … sweeps season and all.

The interview, conducted in the break room of King’s rest home, is an awkward affair to watch, especially because King is drinking from a coffee mug with his own silhouette on it, an act with implications too profoundly Freudian to contemplate. Huntsman — sporting an electric blue tie, hair perfectly coiffed — casts the same image you may remember from the 2012 election: guy at the Newport Beach Starbucks who holds up the line with questions about how their soy milk is sourced.

So how does a discussion between a man whose interview style seems to be an elaborate, Andy Kaufmanesque practical joke and a washed up politician whose biggest moment on the presidential stage was dropping an awkward, “Dad, please leave us alone,” Nirvana reference at a debate generate headlines? With former Governor/Ambassador/Prog Rocker Huntsman’s announcement that he’s “open” to another presidential run. If you’re now in the market for a fainting couch, you can get a reasonable deal at Amazon.

I don’t know what being “open” means. I’m open to a weekend getaway on a catamaran with Kate Hudson. For Huntsman, as for me, I’m not sure that receptivity is the highest hurdle to clear.

This is where it gets cute:

Huntsman said, “I’m open, but here’s the deal: You have to be able to create a pathway from point A to point B. I can tell you how I’d get to the finish line from Super Tuesday, but I can’t tell you how I get through those early primary states, having been there and done that once before.”

Translation: I’d have to figure out how to get past the voters who’ve already revealed their contempt for me and go straight to those who haven’t yet had the chance.

Now, I know what you’re thinking: why bother wasting the attention on a marginal figure like Huntsman? Partially it’s because he’s the kind of public figure — vain, shallow, pretentious — who could always use a good dressing down (the Latin term for this principle is “Sic Semper Douchebag”). Partially, though, it’s because I hope other Republican politicians see him as a cautionary tale.

Jon Huntsman didn’t fail to get any traction during the 2012 campaign because he was a moderate. We nominated Mitt Romney, after all. He failed to connect because it was obvious that he held his own party in contempt.

There’s a difference between trying to nudge your partisan kin on a few issues and taking them to task as a matter of sport. If you’re wondering where the line is, it’s somewhere before you start blaming your failures in the primaries on the fact that people who “work for a living” don’t make up the base. Also, if you’re a Republican politician who’s tempted to make arguments about evolution one of the centerpieces of your campaign, look in the mirror and realize this: you are not in the business of running for president. You are in the business of filling out Slate’s editorial calendar.

You can be a conservative. You can be a moderate. But don’t be the guy who’s ashamed of his own people. You may just end up drinking out of a mug with Larry King’s silhouette on it.