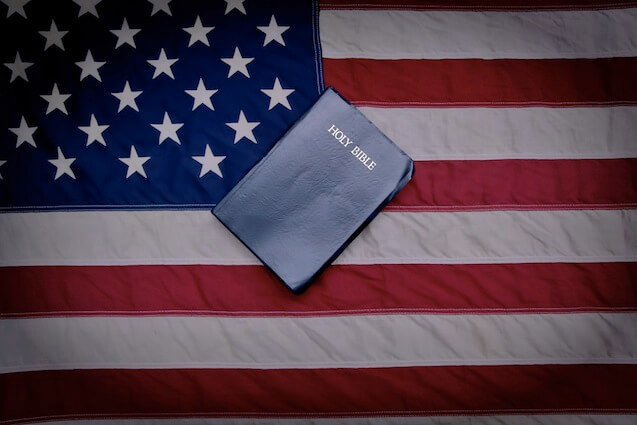 The decision in Town of Greece v Galloway  involved a small city in upstate New York (Greece) in which town board meetings open with a roll call, a recitation of the Pledge of Allegiance, and – brace yourself – a prayer given by a rotating selection of local clergymen. Two town residents sued, arguing that the predominately Christian nature of the prayers (reflecting the composition of the local clergy) violated the First Amendment’s Establishment Clause. The Court’s liberal bloc (Breyer, Ginsburg, Sotomayor, and Kagan) would have banned the town’s prayer tradition, relying on a dominant theory in many earlier cases that the First Amendment prohibits any government action that might appear to “endorse” religion.

The majority opinion, written by Justice Kennedy, rejected the “endorsement” theory and instead voted that state action like legislative prayer does not violate the Establishment Clause unless the state is actually coercing citizens to adopt a particular religious belief. This is very welcome news. The “endorsement” test has been nothing but a roving license for anti-religious zealots to roam the countryside filing lawsuits every time they see a cross or a crèche on public property.

Endorsement is a fuzzy concept. In theory, the legal question is whether the state has endorsed religion in the eyes of a “reasonable observer,” which in practice means an observer with precisely the sensibilities of the life-tenured federal judge hearing the case. Coercion is a stronger standard that allows state and municipal governments to accommodate religious beliefs.

That’s the good news. The bad news is that “coercion” also has fuzzy edges. For example, the Court has previously held that a religious benediction at a high school graduation ceremony might coerce the students, in light of their tender age. Kennedy’s opinion did not renounce that earlier decision (although the Court might revisit that issue soon in a separate case). In any event, Kennedy’s decision sets up Establishment Clause jurisprudence as a “fact-sensitive inquiry” in which the Court has to balance lots of different factors. And whenever the Supreme Court creates a multi-factor balancing test, it amounts to an invitation to the lower courts to make it up as they go along.

There was a simpler way to reach the majority’s result, and one more faithful to the Constitution: the Court should have ruled that the Establishment Clause does not apply to state and municipal governments, period. As Justice Thomas points out in a separate concurrence (joined only by Scalia), the Establishment Clause is about state’s rights, not individual rights.

“Congress shall make no law respecting an establishment of religion.” Not simply that Congress shall not itself establish a national religion, but that it will not make any law having anything to do with religious establishments. When the Bill of Rights was proposed in 1789, at least six states had established churches, other states gave aid to all protestant churches, and some states had no state support for churches. The point of the Establishment Clause was to preserve the existing autonomy – Massachusetts wanted its established church and Pennsylvania wanted its secular state — without any interference from Congress. It was not until the 1940s that the Supreme Court suddenly discovered that the Establishment Clause had been “incorporated” into the 14th Amendment – something that had escaped everyone’s notice for 70 years.

It is, of course, nonsensical to apply the Establishment Clause against the states. The whole point was to liberate the states from federal interference in religious matters.  You might as well say that the Tenth Amendment applies against the states. Establishment Clause jurisprudence has been a mess, and will continue to be a mess until the Court faces up to the fact that the Clause was never intended to provide an individual right to be free from religion.  The Founders would have been appalled by the idea.