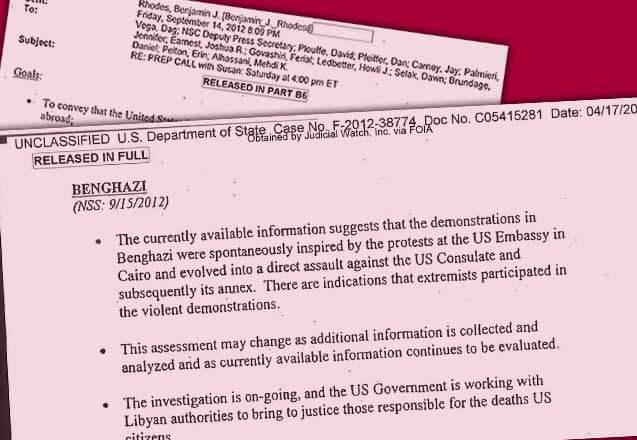 This White House has been painting over its failures for years; opting for quick PR fixes over long-lasting hard work. No where is the strategy more apparent than the drawn-out Benghazi scandal.

Even as the 9/11 attack on our Libyan consulate was taking place, the Obama administration’s primary concern was to preserve its image among the American public. After months of changing stories, deft spin, feigned outrage and mockery of those few reporters who dared to ask tough questions, the corrosion at the heart of this story is beginning to show through.

Through a hard-fought FOIA request, Judicial Watch uncovered emails proving that the White House was behind the “blame the YouTube video” talking point, not the CIA as administration officials claimed.

Today, ABC News’ Jonathan Karl had a heated, eight-minute back-and-forth with a defensive Jay Carney at the daily White House press conference. (You can watch the entire discussion below.)

Carney lamely tried to claim that the smoking-gun talking points were meant to address region-wide anti-American protests. “You knew full well that these Sunday show appearances were going to be dominated by the attacking Benghazi,” Karl replied.

“You stood there, time after time, and said that she was referring to talking points created by the CIA,” he continued. “Now we see a document that comes from the White House, not from the CIA, attributing the protests to the video.”

The nervous Carney attempted to mock the ABC reporter. “I know that you and I both are in a different time zone right now,” Carney told Karl, “But we are still in April of 2014.” Carney also claimed that the talking points were “explicitly not about Benghazi.”

Carl destroyed that assertion a few minutes later on Twitter.

@PressSec says @rhodes44 email not released bc “explicitly not about Benghazi.” It has section entitled “Benghazi” pic.twitter.com/SP3c5MynS6

Is the lid finally coming off the Benghazi cover-up? If so, how will Obama (and Hillary Clinton) limit the damage?