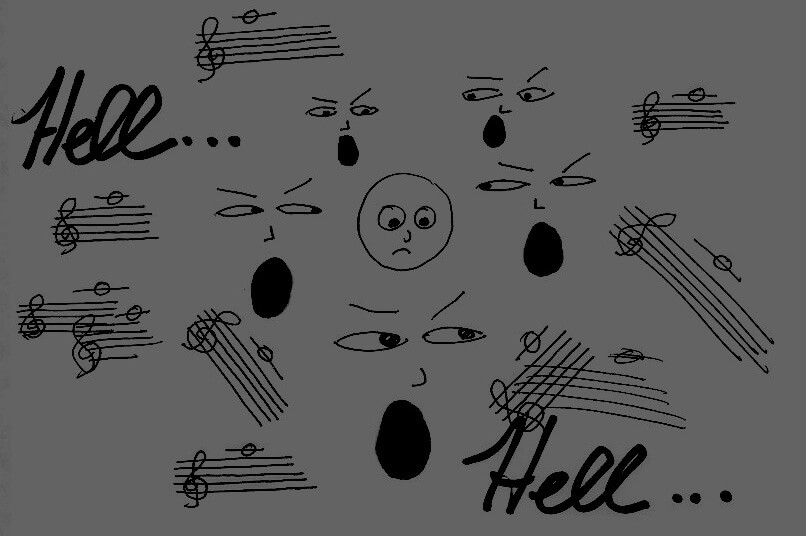 The first and last movements of Spring from Vivaldi’s Four Seasons. I love Vivaldi. I love the Four Seasons. Except for these two movements. I suppose they’re nice enough when they’re played by a skilled group, but indelibly etched on my memory is the sound of our school orchestra tunelessly sawing its way through these two pieces, which it did every year without noticeable improvement. Even when I listen to skilled performers, my inward ear still returns, like a salmon to the stream in which it was spawned, to the sour, phraseless noise that constitutes my earliest memory of Vivaldi. Shudder.

Ave Verum Corpus by Mozart. Again, this isn’t bad music. In fact, it’s a miniature gem of balanced, bland niceness. Which is probably why I don’t like it. Too nice is boring. Moreover, such a bloodless setting of what is, after all, a rather bloodthirsty bit of devotional poetry strikes me as rather impious.

The choral portions of Beethoven’s 9th Symphony. Beethoven wrote music for his heroic ideal of what singers should be, not for singers as they really are, and it shows. Most singers just don’t have the stamina necessary to sing this work without shouting or shrieking. I’m not sure I can imagine anything more disorienting than being trapped in the middle of the soprano section on this piece as most of the sopranos (several of whom are inordinately proud of their A5’s) try to outdo one another on the held high notes. When high notes are held that long, you can’t help but become acutely aware that the singers around you each have their own idea of where the pitch is supposed to be. If I’m destined for Hell, Satan would have to work hard to devise a torture for me worse than surrounding me by sopranos, all of them shrieking slightly different versions of A5, and demanding that I “match that pitch and timbre”.

Wagner’s operas, at least half the time. Yes, I know. Not a terribly original hate. But I’m married to a Wagner nut. Which means every time there’s a Wagner opera in town, off we go. Often the music is heartbreakingly beautiful. Until the singers open their mouths. The singers believe that, since they’ve been chosen to sing Wagner, it must be their destiny to make themselves heard over the orchestra at any cost, even if it means singing ugly. The orchestra members also believe that, because it’s Wagner, for once they don’t have to hold back – it’s the job of Wagnerian singers, after all, to make themselves heard no matter what. A fierce battle between singer and orchestra typically ensues. You could say that the orchestra usually wins, but, in reality, nobody wins. It’s a pity, because on the rare occasions you hear singers naturally powerful enough to carry their part over the orchestra without effort — or an orchestra sensitive enough to hold back — the results are extraordinarily lovely. I think that’s what’s meant by Wagner’s music being better than it sounds.

The Fanfare-Rondeau by Jean-Joseph Mouret. You may not think you know this piece, but you probably do. Thanks to PBS, this might be the most widely-recognized piece of Baroque music aside from Pachelbel’s Canon in D. As a TV theme song, it’s fine. As one of the few Baroque pieces most people can recognize as such, it’s not. It is music that’s unbearably pleased with itself. If this was your idea of Baroque music, you could easily be forgiven for thinking of Baroque music as nothing more than smug, repetitive tootling that never reaches beyond itself, though Baroque music needn’t be any of those things. I find this piece much more annoying than Pachelbel’s Canon.

In fact, I still enjoy Pachelbel’s Canon. Once in a while. Yes, it’s overused. And yes, it’s sad that more people’s musical horizons don’t extend beyond it. But the reason Pachelbel’s ghost follows musicians everywhere, tormenting them, is precisely because the bass line Pachelbel used is so effective. A composer could do much worse than to write the first really famous piece of music using that bass line. In fact, many composers have.

I still haven’t gotten around to my hatred of many madrigals (if I ever see fair Phyllis I will strangle her), Maria Callas, atonality, or polytonality. Or my ambivalence toward countertenors. But that will do for now.

What about you? What classical music do you love to hate?