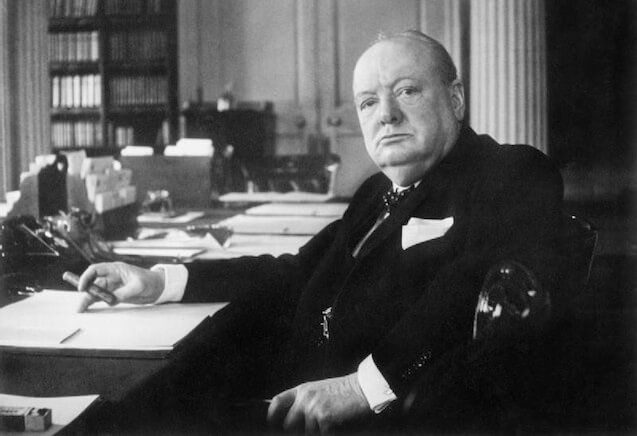 In Nassir Ghaemi’s book, A First-Rate Madness, he argues that Winston Churchill’s well-documented depression (or “black dog,” as Churchill called it) may well have been the reason Churchill was able to see Hitler for who he was; whereas Neville Chamberlain, being of sound mind, could not.

Ghaemi credits Churchill’s clarity of thought to a phenomenon known as “depressive realism.” Depressive realism was discovered quite by accident, by two graduate students who were trying to test Martin Seligman’s “learned helplessness” theory of depression. Seligman believed the insidious negativity internalized by people suffering from depression as a result of early trauma precluded them from functioning as normal adults. They would learn to be helpless.

When two of his graduate students tested this theory using a simple assessment of estimations of personal control, they made a surprising discovery: the exact opposite was true. People who reported having depression were more realistic about how much control they had over a random event than were the normal students, who overestimated the level of control they had. The results of the discovery (which have been replicated in several other studies) lead researchers to conclude that depressed individuals have an acutely accurate sense of reality. (As an aside, one study where Yale students were asked to estimate the level of control they had over the outcome of a coin toss amused researchers, who found the students had an aggrandized sense of power over an event they knew to be random).

Churchill’s unquestionable facility for wartime leadership utterly betrayed his mentation at the time. He suffered great bouts of depression followed by a dramatic undulation into aggressively ebullient behavior. His friend Lord Beaverbrook once described him this way: “He is a mass of contradictions. He is either on the crest of wave, or in the trough: either highly laudatory, or bitterly condemnatory: either in an angelic temper, or a hell of a rage: when he isn’t fast asleep he’s a volcano. There are no half-measures in his make-up.”

Ghaemi reasons that it wasn’t Churchill’s manic temperament that undergirded his ability to lead a nation through the despair of war, but rather it was the “realism of his depressive suffering.” Where Churchill was savvy to the significance of the Nazi threat as early as 1930, Chamberlain believed Hitler was a man with whom he could reason, remarking of him, “In spite of the hardness and ruthlessness I thought I saw in his face, I got the impression that here was a man who could be relied upon when he had given his word.” To call Chamberlain’s mischaracterization unfortunate is an insult to all who suffered as a result. Churchill’s years spent wrestling with depression may have provided the courage that was required to see evil for what it truly was; facing it unafraid and unapologetically.

Ghaemi’s book on the whole is an interesting read; examining the lives and minds of many great leaders: Gandhi, King, Lincoln etc. The author, however, isn’t immune to his own biases. According to Ghaemi, the psychological make-up of a pathological philanderer was the reason for Bill Clinton’s “everyman” appeal and above average popularity. By contrast, he argues that George W. Bush’s milquetoast morality injured his ability to lead the country in crisis.

My chief objection to his assessment of Clinton has to more to do with Ghaemi confusing popularity with great leadership than with the fact I don’t like Bill Clinton. I forgive him a few incorrect conclusions because I think his theory has merit.

That said, I wanted to throw it back to you all and ask: Do you see a link between great leadership and a touch of madness?