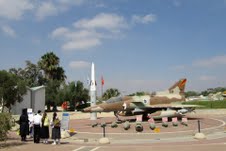 Last Friday morning we packed the kids into the car and took a ride down to Beersheva, where we spent a very interesting few hours at the Israeli Air Force Museum. I took a zillion photos with the intention of providing Ricochet’s gentle readers with a comprehensive illustrated history of the Air Force, but that turned out to be way too big a project for this format. So here are a few highlights.

One of the first things I saw was a little surreal: a haredi (i.e., ultraorthodox) family standing in front of a Kfir C-7 attack fighter. This was a startling image because the haredim do not, for the most part, serve in the armed forces (they’re granted an exemption during their yeshiva studies and almost invariably get a consecutive series of further exemptions until they’re declared permanently off the hook). As you can imagine, this is a touchy business here — the ultra-religious community is extremely vocal about Israeli policy, yet most of them expect the rest of us to send our kids out to defend the country while their boys stay safe in the yeshiva. It was thus extremely interesting to see a haredi family that had enough interest in the IAF Museum to visit it. When I passed them, I heard that they were speaking Hebrew, not Yiddish, so they weren’t off-the-charts ultraorthodox. Here they are:

That pointy thing next to the Kfir is an Arrow anti-ballistic missile, by the way, which was designed to improve upon the Patriot missiles that intercepted Scuds on their way to Israel during the first Gulf War (with limited success).

It can be difficult to cast the mind back to 1948 and imagine the sheer improbability of a bunch of Jewish guys in the middle of the desert — the Jews, remember, were considered at best a “nation of shopkeepers;” they were not remotely perceived by the world at large as warriors — having a snowball’s chance of taking on the simultaneous invasion of five Arab armies. A big, big part of their ultimate success was their totally unanticipated achievement of aerial superiority. And a big, big part of that achievement hinged on their use of British Spitfires and Avia-199 Messerschmidts. (There’s a certain poetry to their use of the latter, which were made out of reconstituted bits of Luftwaffe aircraft.) The Israelis built two functional Spitfires out of remnants of unflyable planes that the British left behind when they ended the Mandate, combined with parts of a shot-down Egyptian Spitfire. They bought many more from Czechoslovakia (also the source for the Messerschmidts) and from Italy. Here’s a Spitfire: And here’s an Avia-199 Messerschmidt: What you see below are the remains of a Bristol Beaufighter, a British bomber, four of which were smuggled into Israel in 1948 after taking off during a fictitious film shoot. A Beaufighter brought down an Iraqi Fury during the war by diving straight towards the sea and pulling up at the last second, a spectacle that must have looked like a true-life continuation of that imaginary film. This particular plane crashed in combat on October 20, 1948. Its remains were found in a sand dune near Ashdod in 1994; two of its three-man crew are still missing.

This next is an Auster AOP/3-5, otherwise known as a “Primus” – so-called because it made a noise like a Primus stove. The Israelis bought twenty of these British twin-seaters in almost useless condition and reconstructed them in an old wine cellar in Sharona. They used them all over the place during the 1948 War for patrol and reconnaissance purposes. The next image shows you pretty much all that’s left of the De Havilland Mosquitos, a light, fast bomber made in England. They played an attack/close support role in 1956. The problem with them was that they were made almost entirely of wood, and the desert heat caused the wood to expand. (The Mosquito had a surprising fan, by the way, in Hermann Göring, who wrote in 1943 that the Mosquito made him “turn green and yellow with envy.”) Now we’re moving into the modern era. This is a Sikorsky CH-53, the IAF’s main transport helicopter. This American-made helicopter has been used to move more than troops: in 1969, during the War of Attrition, a Sikorsky crossed the Suez and carried back a complete Soviet-manufactured Egyptian radar station. In addition to troop transport, Sikorskys have been essential in search-and-rescue missions. Next we have an F4-E Phantom, made by McDonnell Douglas. The Phantom was a critical asset in halting the enemy advance during the Yom Kippur War (1973). These were the planes used to buzz the Syrian General Staff HQ in Damascus. The following is a very special plane. It’s a Dassault Mirage, a French-made tactical fighter. This particular Mirage shot down 13 enemy aircraft during its career in the IAF in the late sixties and early seventies (mostly Egyptian MiGs, with some Syrian MiGs as well). When the IAF phased out the Mirage in 1982, the fleet was sold to the Argentine Air Force; hence the Argentine insignia. After this plane was grounded by the Argentines, they sold it back to Israel for the symbolic price of one dollar in recognition of its historical value. Related to the Mirage is the Dassault Super Mystere B-2, which was the first Israeli plane to break the sound barrier and carry air-to-air missiles. During the Six-Day War, it was used to attack on all fronts: This next plane, the American-made Dakota DC-3/C-47, had amazing longevity. Dakotas participated in every one of Israel’s wars and many operations between the wars as well. At the beginning of the 1956 War, 16 Dakotas dropped IDF paratroopers over the Mitla Pass, the largest paratroop drop in the history of the IDF. This particular Dakota served with the US Army Air Force in WWII — and went on to serve in the IAF until 2001. Next we have a Cobra, a two-bladed, single-engine attack helicopter. It’s remarkably narrow; it’s kind of the Modigliani of helicopters. Cobras have seen a great deal of action on the northern front: they were a critical weapon against Syrian armor and fortifications during the 1982 War in Lebanon, and were used extensively against Hezbollah during the 1993 and 1996 operations.

The next two pictures show a Model L Gazelle, a French/British anti-tank combat helicopter. The Syrians used Gazelle Ls against the Israelis in 1982. The IAF shot some down, collected the bits and constructed two flightworthy helicopters out of them. The pair joined the IAF, sporting both Syrian and Israeli insignia. They didn’t last long, though, because there were no spare parts. Next we have a MiG-23 that was brought to Israel by a defecting Syrian pilot in 1989. It’s the most advanced Soviet fighter the Israelis have ever captured. And here is its elder brother, a MiG-21 that was brought to Israel in 1966 by a defecting Iraqi pilot. The acquisition of this MiG involved a long and complex operation by the Mossad and IAF intelligence. Simulated dogfights with it proved tremendously useful in exposing its weaknesses; dozens of MiG-21s were subsequently shot down in combat. In homage to the way the plane was brought to Israel, the IAF gave it the number 007. The following picture shows one of two Mig-17s that arrived here in 1968 when their Syrian pilots accidentally landed at a base in the north of Israel because of a navigation error. (I have no idea why they weren’t shot down.) This is your correspondent in the cockpit of a Tzukit. The plane is an upgrade of the Fouga Magister, which was the first plane ever constructed by the Israeli Aircraft Industry. The Tzukit came into service in 1983 and is used as a trainer in the IAF flight school. There was a great deal I didn’t have the space to show you – visuals of both Israeli and enemy ground-to-air missile capability, for example. I’ll leave you with two items that speak for themselves.

The first is a photograph of a book, “Jewish Pilots in the World War,” which was published in Berlin in 1924. It records the history of young Jewish German men who struggled against many obstacles to become fighter pilots in the Imperial German Air Force in World War I. Most who survived their service were subsequently murdered by the Nazis in World War II. It’s remarkable that this book survived the war since the Nazis were careful to destroy most German books on Jewish subjects, particularly anything that cast Jews in a positive light.

The last image is a photograph, taken on September 4, 2003, of three Israeli F-15s flying over Auschwitz. As the jets passed overhead, formation leader Brig.-Gen. Amir Eshel read out this statement, which was broadcast on the ground: “We pilots of the Air Force, flying in the skies above the camp of horrors, arose from the ashes of the millions of victims and shoulder their silent cries, salute their courage and promise to be the shield of the Jewish people and its nation Israel.” In the cockpits, the Israeli crews carried the names of all those recorded murdered in Auschwitz on that date exactly 60 years before.