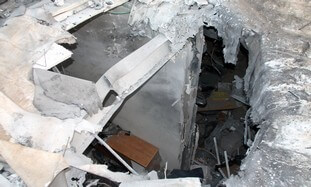 We’re in the middle of a hair-wilting, energy-sapping, crop-shriveling heat wave here in Israel. But that’s not what this post is about.

This is a photograph of the result of a direct hit by a Qassam rocket on the roof of a rehabilitation center for special-needs children in Sderot, a city inside sovereign Israel whose citizens have been targeted by Hamas for years.

This photo was not taken around the time of Operation Cast Lead, nor during any of the other periods of conflict between Gaza and Israel that have been deemed sufficiently interesting to warrant attention beyond these shores. It was taken two days ago. A cease-fire has supposedly been in effect since 2009, but Hamas still retains the right to launch rockets into the middle of Israeli civilian populations.

To wit: the attack on Sderot took place twenty-four hours after an Iranian Grad missile, also fired from Gaza, landed in Ashkelon, a city even deeper inside sovereign Israel. It should be noted that in addition to containing 125,000 Israeli civilians, Ashkelon contains the power plants that provide 70% of Gaza’s electricity. Attacks like this might therefore seem counterproductive, but ratcheting up the misery level at home in Gaza via an attack on Israeli civilians is a win-win for Hamas. Images of Gazans without electricity or other basic needs play extremely well abroad; they feed a carefully constructed narrative that enables those so inclined to justify their distaste for Israelis and Jews. And the response of the IDF to the attack on Israelis — whatever that response may be — enables the shifting of blame for all Gazan misery to Israel while providing a justification to continue attacking Israelis inside Israel. If you’re telling yourself that that isn’t entirely logical, you’re right. But in the absence of any substantive foreign or domestic policy other than jihad, it works as a default modus operandi.

There are many reasons why Hamas is apparently trying to provoke the IDF at this particular moment: to derail the efforts of its blood rival, the Palestinian Authority, to inch towards accommodation with Israel; to reply to the Arab League, which on Thursday greenlit direct peace talks between the Palestinians and the Israelis; to take advantage of residual bad feeling against the IDF in the wake of the flotilla imbroglio; to distract attention from its own abysmal failure to build a functioning society for Gazans; and so on. And there is, perhaps, a certain grim logic to the argument that we should simply ride out the violence, since upticks like this indicate that Hamas is under pressure. If they’re feeling the heat, that can only be a good thing.

Fair enough, but there are nine-year-old kids in Sderot who have spent their entire lives on the front line. Hamas is believed to possess thousands of rockets, including at least a couple of dozen that can reach Tel Aviv, which is all of 44 miles away. Hamas is, and has always been, on a war footing with us. And should they manage to do to us what they intend, there is no question but that their next target will be the Palestinian Authority.

Netanyahu and Abbas have a common enemy in Hamas. Hamas might have Iran behind it, but an Israeli/Palestinian alliance has the backing of both the United States and the Arab League. The latter might not be willing at this stage to go any farther than make the occasional statement, but that in and of itself is highly significant. Much can be made of this historical moment, I believe, if the parties involved have the courage to state the obvious on a world stage: that the Palestinians are not monolithic. Israel can and should make peace with the Palestinian Authority, but it is madness to expect her to make peace with the jihadists in Gaza.

I am deeply sympathetic to Abbas’s reluctance to label himself and the entire population of the West Bank as collaborators, which would surely result if he stated outright that Hamas is as much his enemy as it is Israel’s. But as the pace of rocket attacks inside Israel begins to accelerate, it might be time for him to take a stand — not against his brother Palestinians, but in their defense. He can stand openly against tyranny, against oppression, against the willful rolling back of all progress.

It’s in his interest to do so, before Gazan rockets start landing in Ramallah. And in the meantime, the various voices that keep rising up imploring the Israelis to include Hamas in the peace process can stuff it. You have something to say about Hamas’s peaceable intentions? Go tell it to Sderot.