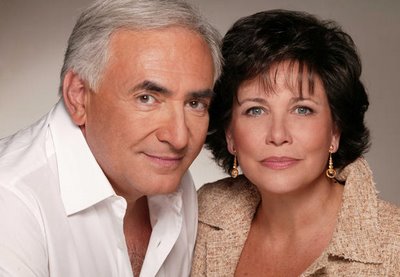 Dominique Strauss-Kahn resigned his post as Managing Director of the International Monetary Fund Wednesday night. He should have been fired – not, however, this week, but back in 2008.

As everyone knows by now, DSK has been charged with and indicted for sexual assault. He may or may not be guilty as charged. The authorities in New York believe they have a case, and Strauss-Kahn’s lawyers have indicated that they will attempt to show that the sexual acts that, they acknowledge, did take place on Sunday in the Sofitel Hotel between DSK and the woman tasked with cleaning his room were consensual. Strauss-Kahn is a very rich man. He has hired top-flight defense lawyers, and he will have his day in court. I shudder at the thought of what they will try to do to his accuser, but that cannot be helped. He should be awarded every opportunity to defend himself.

As I have indicated in earlier posts – here, here, and here&nbsp;– I think it possible but highly unlikely that DSK is innocent of this particular act. His previous conduct – well known to those in the political class in his native France but kept from the general public there by privacy laws designed to shelter miscreant notables – justifies such a conclusion. But the fact that he has been charged would not justify in my opinion his being fired by the executive board of the IMF, which would have suggested a judgment on their part of his guilt. Back in 2008, however, they had the goods on him, and they should have given him the boot. Shortly after taking up his appointment as General Director, Strauss-Kahn had a fling&nbsp;at an international conference in Davos, Switzerland with a subordinate – Piroska M. Nagy, who was at the time a senior official in the IMF’s Africa department, and who took a buy-out package soon thereafter and left for a position as senior adviser to the chief economist at the European Bank for Reconstruction and Development.

The trouble for DSK reportedly began after Nagy’s departure from the IMF when her Argentinian husband Mario Blejer stumbled upon what have been described as “’explicit’ emails exposing the affair” and blew the whistle.&nbsp; The executive board of the IMF then commissioned an investigation to discover whether the relationship had been consensual, whether Strauss-Kahn had shown Nagy any particular favoritism thereafter, and whether he had forced her out. &nbsp;The investigation exonerated DSK, who acknowledged “a serious error of judgment” and was let off with a warning.

Ms. Nagy took another view. In a letter to the lead investigator&nbsp;– Robert Smith, an attorney at Morgan, Lewis and Bockius – she wrote, “Despite my long professional life, I was unprepared for the advances of the Managing Director of the IMF. I did not know how to handle this; as I told you I felt, ‘I was damned if I did and damned if I didn’t.’” At the end of her letter, she added, “I fear he is a man with a problem that may make him ill-equipped to lead an institution where women work under his command.” I would not want to argue that the questions that the IMF asked Smith and his colleagues to investigate were in any way improper. If the relationship was not consensual, what Strauss-Kahn did was arguably criminal, and he should certainly have been fired and perhaps also arrested and charged. If he abused his position by favoring his lover or punishing her, he should obviously also have been fired.

My objection is twofold. First, I would argue that – even if Nagy consented and even if DSK neither favored nor punished her – what he did constitutes abuse. I am not a friend of American public policy with regard to what is called “sexual harassment.”&nbsp; The definition of what constitutes “a hostile environment” is so loose as to invite abuse (of which there is plenty). But that does not make the point advanced in Piroska Nagy’s letter to Smith invalid. No supervisor should put a subordinate in the position that Strauss-Kahn put Nagy, and no employer should tolerate anything of the kind.

UPDATE: Since posting this piece, I have learned from reading The Wall Street Journal that on 6 May the executive board of the IMF “changed its ethics code, now censuring staff for personal relationships between supervisors and subordinates.”

My second contention may be more controversial. It has to do with marriage. At the time he pressed his attentions on Nagy – and it took him time and persistence to get her to acquiesce – DSK was married to Anne Sinclair (pictured with him near the top of this post), as he still is. At that time, Nagy was also married.&nbsp; One could argue that, if what took place between the two IMF employees was consensual, it was a purely private matter. I beg to differ.

Marriage is a matter neither exclusively private nor public. It is a private act between a man and a woman that is graced with a public sanction because it serves a public, as well as a private, purpose. As I argued in my book Soft Despotism, Democracy’s Drift,&nbsp;that public purpose is implicit in its other name – matrimony, which comes from the Latin matrimonium, meaning “condition of motherhood.” For this reason, when a marriage is contracted, it is contracted in public before witnesses. And when it is dissolved, it is for the same reason dissolved in public.

Society has a stake in the integrity of the institution. It is the crucible within which the character of the next generation is formed. In its absence, if the institution is severely weakened or destroyed, we will have on our hands a generation unsuited to shouldering the responsibilities that come with citizenship. This is no small matter. Divorce is now commonplace, and forty percent of the children born in the United States are born out of wedlock. Most of these are reared in circumstances not conducive to their eventually becoming responsible adults.

When I was a child, this was understood. If someone in the corporate world did what Strauss-Kahn admitted to doing, he would be fired forthwith. The wives of his colleagues would not stand for his being kept on. We have largely forgotten what is at stake. Adultery is not – as the French are inclined to suppose – innocent, good fun. It nearly always does damage to the spouses of the two involved, and, when it becomes commonplace, it does grave damage to the society as a whole.

The general loosening of mores and manners that has taken place over the last two generations may someday have dire consequences for the United States. In effect, we have contracted what I have called in my last few posts “the French disease.” When the executive board at the IMF got wind of the affair that took place between Strauss-Kahn and Nagy, they should have fired them both. In such circumstances, employees will understand that they are damned if they do and not if they don’t.

I realize that this will seem harsh. That is, I believe, because we have forgotten the stakes. You will notice that I do not apply precisely the same standards to those who are single. Had Nagy been single and had she been involved with a co-worker who did not supervise her and whom she did not supervise, the relationship might not have been entirely innocent (courtship rarely is), but it would have been in the public interest that indiscretions attendant on it be resolutely ignored. In a society such as ours, as I can testify from personal experience, the road to matrimony is not always straight.

I can also imagine that there might be jurisdictions in the United States in which it would be deemed contrary to public policy to do as I suggest and that an employer who followed such a policy would open itself up to law suits on the ground that it was discriminating on the basis of marital status. If so, this preposterous state of affairs merely reinforces my point – that there is something gravely wrong with the widespread presumption, now perhaps in some jurisdictions embedded in the law, that what takes place between consenting adults is a purely private matter of no interest to civil society and that to draw a distinction, legal or social, between those who are married and those who are not is anathema. For a long time now, we have been cruising for a bruising by undermining the institution that lies at the foundation of civil society; and, to judge by what is happening within the welfare state, we are now in the process of getting the bruising that we have asked for.

More by Paul A. Rahe.