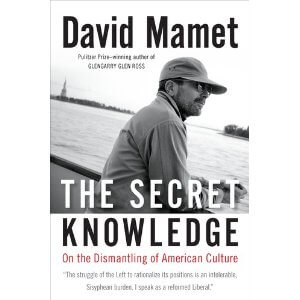 I’m reading David Mamet’s new book, The Secret Knowledge, in which in marvelous, mordant prose he explains that he has become a convinced, thorough and indignant conservative.&nbsp;&nbsp;I’m making notes as I go–Mr. Mamet has agreed to sit down for an Uncommon Knowledge&nbsp;interview in August–but I can’t resist offering you a soupcon or two of Mamet a few weeks early. &nbsp;Have a taste:

My revelation came upon reading Friedrich Hayek’s The Road to Serfdom. &nbsp;It was that there is a cost to everything, that nothing is without cost, and that energy spent on A cannot be spent on B, and that this is the meaning of cost–it represents the renunciation of other employments of the money….[M]oney spent on more crossing guards cannot be spent on books. &nbsp;Both are necessary, a choice must be made, and…this is the Tragic view of life.

My question, then, was, that as we cannot live without Government, how must we deal with those who will be inclined to abuse it–the politicians and their manipulators? &nbsp;The answer to that question, I realized, was attempted in the U.S. Constitution–a document based not upon the philosophic assumption that people are basically good, but on the tragic confession of the opposite view. The great wickedness of Liberalism, I saw, was that those who devise the ever new State Utopias, whether crooks or fools, set out to bankrupt and restrict not themselves, but others.

“The great wickedness of Liberalism.”

Something tells me that David Mamet won’t be introducing Barack Obama at the president’s next Hollywood fundraiser.