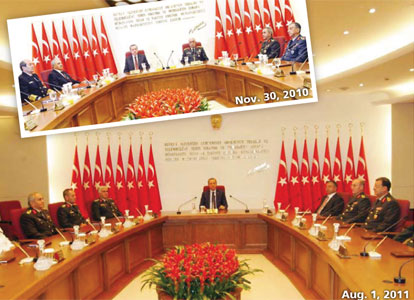 As you’ve all by now heard, Turkey’s Chief of the General Staff and the Commanders of the Army, Navy and Air Force resigned. This is unprecedented in the history of the Turkish Republic. In a way, I’m surprised it took them so long: For years, hundreds of their colleagues have been locked up, without conviction, on incoherent charges of “coup-plotting.” Given that this is apparently going to go on forever, what exactly can you do but resign?&nbsp;

Much of the commentary about this seems focused on one silly question and two comparatively unimportant ones. The silly question: Will there be a coup? The answer: Beg pardon? If this&nbsp;doesn’t convince you that the military has lost its taste for staging coups, will anything? They resigned. That’s the last thing you’d do if you planned to fire up the tanks and roll through the streets.

The comparatively unimportant questions are these: Is this good for Turkish democracy, or bad? Those who think it’s good find it terrific that at last, the military has learned to express its displeasure with political developments the civilized way: You don’t like it, you resign. Those who think it’s bad note that now Erdoğan can replace them with his&nbsp;boys, further solidifying his hold on every major power center in Turkey. Both observations are correct.&nbsp;

But the missing and most important question is this: Who exactly is running the military now? Because the idea that one military commander is the same as any other is kind of a historically famous mistake (Tukhachevsky might have explained why had he not been purged).&nbsp;

Erdoğan quickly appointed General Necdet Ozel, formerly commander of the military police, as the acting Chief of the General Staff. President Gül breezily assured the country there was nothing to worry about; everything was under control. Steady on, markets!

Let me get this straight: The former commander of the military police has everything under control?

Now, this isn’t easy&nbsp;to control. This is NATO’s second-largest armed force, with more than 600,000 men and women serving in the army, navy, air force and paramilitary gendarmerie. Turkey is smack in the middle of the most volatile region of the world. It’s at the heart of strategic land and sea lines from Gibraltar to the Middle East and Central Asia. This is an environment full of hot&nbsp;conflicts, and Turkey is the last link in the NATO defense chain. And it is, by the way, one of the six NATO countries that have hosted US tactical nuclear weapons, including 90 B61 gravity bombs. You want to hand control of this, right now, to someone wet behind the ears? Are you nuts?

This military’s key role is not to plot coups or protect secularism but to preserve and protect the nation’s independence, territorial integrity and vital interests. I’m well aware that if you superficially follow the news from Turkey, you might not realize that. But in fact, Turkey needs every bit of military strength and cunning it’s got: This is a damned dangerous neighborhood.&nbsp;

The guys who resigned are the ones who have for years been planning for combat; they’re deeply immersed in the details of intelligence, operations, organization, training and logistics. They coordinate with other NATO member states and probably have some important numbers on their cellphones. The military’s also responsible for disaster relief (as in, for example, an earthquake–an ever-present possibility in Turkey). Turkey runs one of the largest combat air fleets in NATO. The Navy is heavily involved in NATO, multinational, and UN operations; its roles include control of territorial waters and security for sea lines of communications. The Turkish Navy is key to global anti-piracy operations and to ensuring maritime security in the Gulf of Aden. It’s part of the International Security Assistance Force Operation in Afghanistan. Above all–amazing that I should have to point this out–Turkey borders Syria, Iran and Iraq. You can’t play amateur-hour with neighbors like that, you just can’t.&nbsp;

Turkey is also facing a severe internal threat in the form of the PKK.&nbsp;Three soldiers were killed yesterday&nbsp;and four wounded in an ambush in Van province.

So. This is Işık Koşaner,&nbsp;who just resigned:

Having graduated from Royal College of Defense Studies in London/England in 1987, he served as the Director of Strategy Branch of Strategy and Force Planning Department at TGS, Commander of the 131st Infantry Regiment and as the Chief of Staff at the Special Forces Command.

In 1992, he was promoted to Brigadier General. He served as the Head of Logistics Planning Department of the Turkish Land Forces and then commanded 1st Commando Brigade. In 1996, he was promoted to Major General and served as the Commander of Military Academy. After his promotion to Lieutenant General in 2000, he served as Undersecretary of Ministry of Defense and Commander of Turkish Peace Forces in Cyprus.

Obviously a well-qualified man. Four hours after his resignation–more than enough time for serious multi-party consultations and thoughtful reflection on the needs of the service, I’m sure–Necdet Özel replaced him. Özel&nbsp;has never served in NATO or received any training in the United States. There is nothing particularly wrong with him–he was expected to replace Koşaner anyway, in 2013–and he appears to be a dedicated, professional soldier. But his main job since 1995? He’s been in charge of the gendarmerie. Does he have the numbers of the other key heads of the NATO command on his cellphone? Has he met them in person? Has he ever taken part in a war game? One assumes, since he’s apparently marvelously untainted with charges of coup-plotting, that he has limited experience of war games.

So what is the effect of this on military morale? What is the effect on military capability? Seems to me those are more important questions, in the big scheme of things, than whether Turkey’s becoming more democratic or more authoritarian, because in case you hadn’t noticed, this whole region has gone completely berserk.

I note that Iran, twelve hours ago,&nbsp;issued a “tough warning” to Turkey:

Iran’s Islamic Revolutionary Guard Corps has issued a harsh warning to Turkey to end activities in Syria. In an article in IRGC’s weekly Sobh’eh Sadegh, the elite military force asserted that Turkish forces were crossing into Syria as part of a Western campaign to destabilize the regime of President Bashar Assad.&nbsp;

So much for Turkey’s “toughened stance” on preventing civil war in Syria.&nbsp;

It’s really time for all of Turkey’s political parties to stop bickering, set aside all their differences about the Ergenekon and Sledgehammer trials, stop worrying about who’s going to enter parliament, and cooperate&nbsp;to make sure these guys are replaced by the very best-trained, most experienced and most capable military minds the country’s got. If anyone thinks the United States or Europe will pick up the slack in a major military confrontation now, they just haven’t been paying attention to the news.&nbsp;

You want someone who doesn’t have a lot of practice taking the helm of the military at a time like this about like you want to be on a jumbo jet with an engine on fire captained by a trainee pilot.&nbsp;