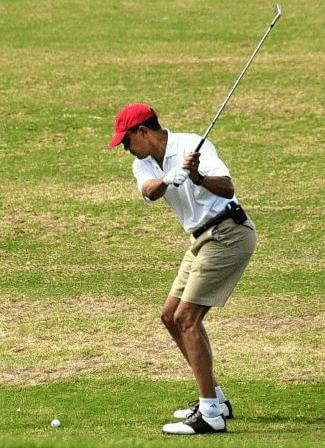 Horse-racing promotes itself as the “sport of kings”. For politicians, there’s always golf – “a game in which you yell “fore” . . . shoot six . . . and write down “five”,” the late Paul Harvey&nbsp;once noted.

Fifteen of the last 18 American presidents have taken up the game – some better than others&nbsp;– with very different approaches as to how they approached the first tee.

Eisenhower and a leisurely 18 holes went hand-in-hand in the halcyon 1950s. JFK hid his fluid swing&nbsp;during the swingin’ New Frontier, lest the public see him as a younger Ike. The two Bushes (part of a family golf dynasty) played the sport at a race-the-clock, frenetic pace. Bill Clinton? His golf game, like other aspects of his presidency, had honesty problems.

Reportedly, the nation’s current Duffer-in-Chief sports a 17 handicap&nbsp;(others place it in the mid-20s). His game has its ups and downs – one of the bigger downers being the June “golf summit”&nbsp;with Speaker Boehner that was supposed to jump-start a summer of bipartisanship love.

Sure enough, Obama was out on the links on Tuesday when the East Coast was jolted by the 5.8 earthquake. Reportedly, he played on – three-putting on the first hole, which pretty much sums up how things have gone for him this summer.

Golf may or may not be America’s national obsession. It’s not Obama’s obsession – as of the end of June, he’d played 75 times since taking office, an average of 2.5 rounds a month (my brother-in-law, who lives in retirement, in Wilmington, N.C., and lives to play golf, hits the links at least three times a week).

If anyone’s obsessed, it might be the media, which keep a running count&nbsp;of each and every presidential golf outing – fodder for Obama-haters (just like Michael Moore had Bush 43 on a golf course&nbsp;in Fahrenheit 411).

But as the Obama presidency finds itself in a political sand trap (now down to 38% among independents), it’s easy to look at Obama’s golf game as emblematic of what’s gone wrong with his presidency.

Judging by still photos of his swing&nbsp;– there’s not much video of the First Duffer in action, the White House doesn’t release scores, and at times the presidential foursomes go out of their way to duck the cameras&nbsp;– it’s obvious that Obama’s not a natural at the sport . . . just as he’s not a natural at governing, it turned out.

(Here are a few experts offering their take on what’s wrong with the presidential stance&nbsp;. . . not his stance on issues, but his golf stance).

So how could Obama elevate his game (again, we’re talking golf, not politics)?

That’s easy: do what most determined hackers do: turn to a swing coach, take lessons, hit buckets of ball – not throwing oneself out on a course 75 times and hoping for better results.

Unfortunately, this was not&nbsp;the Obama approach to jump-starting the economy. Rather than returning to the fundamentals of the game and relying on sage professional advice, the President instead threw $787 billion of dubious federal stimulus money at the problem.

There was no swing coach on Capitol Hill, only a couple of free-market agnostics in the form of Harry Reid and Nancy Pelosi – hardly anyone’s idea of smart economic caddies.

Since no one likes to think of a nation’s chief executive stuck in a sand trap, here’s a piece of advice for getting the Obama golf game – and his presidency, perhaps – back on the fairway:

Haney, for those of you not addicted to the Golf Channel and the PGA Tour, is a swing coach by trade (over 40,000 golf lessons since 1976). He’s tried to teach the finer points of the game to Rush Limbaugh, Ray Romano and Charles Barkley (Barkley owning one of the world’s legendarily awful golf swings).

Obama shouldn’t merely welcome Haney’s counsel. He should welcome a chance to do the same star turn&nbsp;as Limbaugh, Romano and Barkley on The Haney Project, part of the Golf Channel’s program lineup (available in about 50 million living rooms, by the way).

First, for a lot of Americans who’ve never mastered the art of driving, chipping and putting, they might find Mr. Obama a little more sympathetic after they’ve viewed him humbling himself on nationwide cable TV with a round of hooks, slices and presidential yips.

Second, consider the demographics&nbsp;of the men’s-tour’s viewing audience. It spans generations, education and income levels. Sure, it’s not a racially diverse audience. But if race were always a consideration, then the Obama family would not presently be ensconced in Martha’s Vineyard, a locale that raises questions about blacks, whites and self-segregation.

Golf obviously is one of Barack Obama’s release valves. It could also be a means to a more humble image – something he’ll need to demonstrate a whole lot more to disappointed supporters over the next year.

One reason why this president, like his predecessors, enjoys this particular sport: A.A. Milne’s observation that golf is “the best game in the world at which to be bad”.

That’s not the case with presidential politics. And, if President Obama doesn’t soon straighten out his game (in this case: politics, not golf), he’ll have more free time than he’d like to lower that handicap.

Whatever it may be.