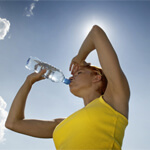 From The Telegraph: &nbsp;EU officials concluded that, following a three-year investigation, there was no evidence to prove the previously undisputed fact. Producers of bottled water are now forbidden by law from making the claim and will face a two-year jail sentence if they defy the edict, which comes into force in the UK next month. […]

There are 28 comments.
But you can't read them because you're not signed in!