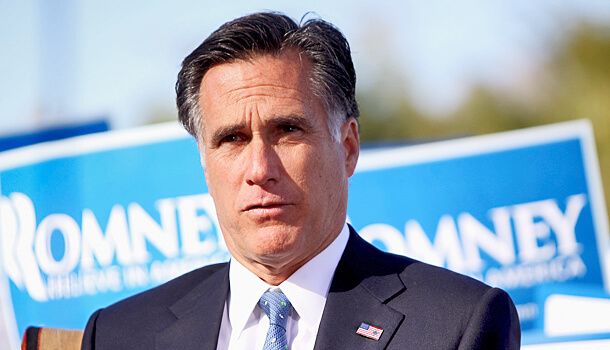 John Hinderaker encapsulates an assumption which has started to take hold among many of Mitt Romney’s backers: that the fault for what appears to be an increasingly likely 2012 election loss lies with conservatives for making this a real primary. Speaking of the see-saw of not-Romney candidates, he writes:

The same pattern has been repeated more than once during the current, discouraging presidential nominating process. If the GOP loses this year’s presidential contest, the party will have no one to blame but its own activists.

I’m hearing this meme repeated by many increasingly dejected Romney supporters around Washington, D.C. See, if people had just gotten in line when we told them to, the theory goes, things would be looking up. But this is revisionist history, and this is a meme that deserves to die.

It is ludicrous to claim that the fault lies among conservatives for Romney’s precipitous drop among independents, which he’s endured over the past month (in some polls, it’s been a negative swing of 20 points), the primary reason he now lags Obama in most measures. Consider: since Romney ground Newt Gingrich into pulp in Florida with his 65-1 ad ratio three weeks ago, there has been not one debate, not one major piece of scandal or breaking news, not even one major round of negative ads against Romney. There has only been a series of gaffes on Romney’s part (most notably his line about not caring about the very poor) and a series of numbers which show mild economic improvement.

In reality, it’s those who demanded conservatives get in line ages in advance who made a fundamental mistake in how they approached this election. By demanding an ideological shift from a more populist, more fiscally conservative base they no longer direct or control, Romney’s most prominent backers failed to learn any of the right lessons from what led to the 2009-2010 cycles. They failed to realize that the base expected more from a candidate, from a leader, than the politics and policy of the past. This problem worsened when their candidate put forward a meandering, maintenance-based agenda which inspires no one, not even his backers. As Jim Pethokoukis put it recently:

Mitt Romney wants to be the next president of a country in need of serious and sweeping economic reform. And here are the first two points in his 59-point economic plan:

Now imagine private-equity boss Romney back at Bain Capital sitting down to read his team’s 59-point turnaround plan for some troubled widget maker. And imagine if the first two action items started with the phrase “Maintain current ….” Romney probably wouldn’t bother reading any further before tossing the report in the trash, calling a meeting, and cracking heads. Heck, if Private Equity Romney were called in to turn around Romney Campaign Inc., axing CEO Romney might be the first move on his to-do list—especially after looking at last night’s numbers from Colorado, Minnesota, and Missouri.

Even worse than this unimpressive agenda is a failing of the candidate: that Romney has proven incapable of selling himself to the American people. In 2008, Romney failed in a horserace against McCain, Huckabee, Giuliani and Thompson. (Read Dan McLaughlin for reasons why.) Having the only real machine in the 2012 cycle and as an experienced candidate, he absolutely should have been able to stand on his own right as soon as this race came down to the far more flawed and less politically capable efforts of Santorum, Gingrich, and Paul. By all rights, he should be running circles around them all.

Romney has every advantage in money, endorsements, organization, name ID, looks, technology, volunteers, mail, data, and infrastructure. What’s more, Romney’s staff is fastidious and detail oriented. A recent news story focused on the effort his advance team puts into getting the lighting right for their candidate to make for the best newspaper photos the next day. Rick Santorum, for Pete’s sake, doesn’t even have an advance staff.

The reason Romney hasn’t ended this thing in a walk is that he hasn’t successfully sold himself to the base or the country. He has simply not delivered as a salesman of his ideas or himself. For someone who’s been compared time and again to a used BMW salesman, he is stuck in the same pandering rut that prevented him from closing the deal last time around.

Instead of counting on an agenda or an ability to personally inspire, the argument from his supporters has over and over again hinged on Romney’s purported electability. This is one of the weakest arguments to make in a primary, as Romney’s funders have acknowledged recently (because when you win, it’s expected; but when you lose, instead of a speedbump, it strikes at the core of the case you’re making). As the cracks developed in Romney’s armor, his prominent backers went from denial of their existence to an argument that they don’t matter to increasingly loud demands that Obama’s badness as a president will bring everyone together, so there’s nothing to worry about.

Here’s the problem: that last argument can be used by every candidate in the GOP field – it’s not specific to Romney at all. And I personally doubt that it’s true.

Again and again, Romney’s stump speech turns to how much he loves America the Beautiful, reciting the phrases and talking about the country. It may be sincere, even if it seems bland and rote. But here’s the point: even if it’s real, the conservative voting base wants and expects more from a candidate than policies of maintenance and mawkish patriotism.

Everything we’ve seen happen since the election of Barack Obama should’ve taught Romney and his supporters that lesson. But they decided to play it safe, counting on a terrible economy to bolster their chances. And now, the economy appears to be making slight but steady improvement, and his route to the nomination looks to be an extended trench war paired with an overwhelming air attack – two things designed to chew even further at his ability to pivot back to a general election strategy.