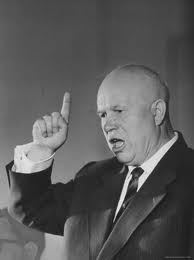 “We will bury you,” Soviet premier Nikita Khrushchev told western diplomats in 1956, and as late as the nineteen-eighties even many Americans remained convinced that the Soviet  economy was producing respectable levels of economic growth.  “Those in the U.S. who think the Soviet Union is on the verge of economic…collapse,” wrote Harvard historian Arthur Schlesinger, Jr. in 1981, “are only kidding themselves.”

With this in mind as I was doing some Cold War reading just now, I came across a remarkable passage in A Century of Violence in Soviet Russia by Alexander Yakovlev.  Himself a member of the politiburo, Yakovlev, who died in 2005, devoted his final years to investigating the crimes of the Communist Party.

“[W]hile on an official trip to the Primorsky district [a district on the Black Sea],” Yakovlev writes,

I heard Nikita Khrushchev speak….He was on his way back from China….He flew into a rage, shouted, and threatened drastic action when the captains of some fishing vessels reported on the disgraceful state of the fishing industry.  They’d fill their fishing nets four or five times but often weren’t able to offlaod their catch for lack of processing equipment on shore.  So they’d throw the fish back in the sea.  And this would be repeated season after season.

So there’s our planned economy for you, Khrushchev fumed.  Spotting Mikoyan [Anastas Mikoyan, a member of the politburo who was close to Khrushchev] in the audience, he dressed him down on the spot, and he phoned Malenkov [Georgy Malenkov, another senior Soviet] in Moscow with orders to buy new processing equipment—special vessles, as I recall, from Denmark.  He glowed with energy.  The captains were ecstatic.  Later, back in Moscow, I inquired into what had been done on his instructions.  The answer:  absolutely nothing.

Ronald Reagan, who held a degree from Eureka College, understood that the Soviet economy was doomed by its very nature.  Arthur Schlesinger, Jr., who studied at Philips Exeter, Harvard, and Cambridge, did not.

Who was kidding whom?