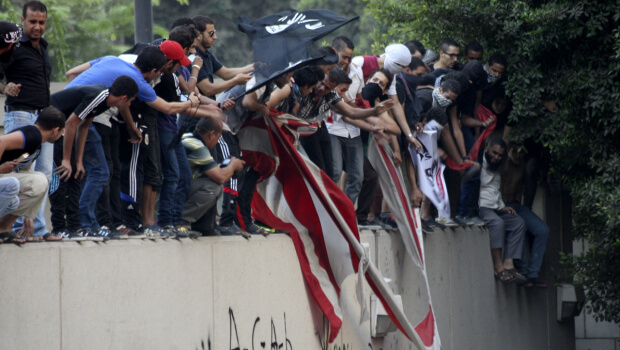 NBC/WSJ and Rasmussen both report steep drops in Obama’s handling of foreign affairs.Why?

In the NBC poll, the numbers are particularly stark: from an approval of 54-40% down to 49-46%, a net swing of 12 points (down six on approval, up 6 on disapproval) falls into the category of “unspinnably bad.”

There’s been a bit of polling on reactions to Romney’s handling of the issue, none of it either spectacular or consequential. American voters know who the Commander-In-Chief is, and hold him responsible for what’s happening overseas. It’s axiomatic that Americans have only a superficial understanding of the history, politics and niceties of foreign policy. But they’ve got a sense for pictures and video that mean trouble.

Obama’s foreign affairs polling hit comes from Americans having a sudden understanding that – as I mentioned in A Campaign On The Edge — lofty speeches in Berlin and Cairo don’t alter the behavior of the bad actors of the Islamic world. They barely alter the behavior of the non-extremist elements. (Stonking bribes to the new governments of Egypt, Libya and Tunisia only seem to have gone so far, oddly enough.)

As Jimmy Carter learned (and what were facile comparisons to Carter are becoming increasingly more appropriate), the pictures matter.

Carter’s staff couldn’t grapple with the power of how Nightline, with its daily recitation of the Iranian hostage crisis, burned the image of Carter’s feckless, inept leadership into the minds of Americans. Carter’s team looked at Reagan and thought, “This guy is a boob.  A crazy person. He doesn’t get it.” But as American flags burned, embassies were overtaken and victims paraded for the cameras, the policy differences between Reagan and Carter ceased to matter: Carter was weak, Reagan wasn’t.

The question for Obama now is simple: how many days of burning embassies, and how many photos of the Al Qaeda flag flying over our (soon-to-be former) diplomatic posts in the Middle East does it take before the “Osama is dead” line starts to lose its political punch? It’s the single point that average voters in the swing demos associate with Obama being a strong military and foreign policy leader.

We’re going to find out in the next two weeks or so. And the more it becomes clear that the White House and the State Department ignored warnings on the ongoing chaos in the world, the more skipping those PDB briefings will start to look like a liability.

It was just days ago that Democrats were confidently strutting on the national political stage, boasting they now owned the traditional GOP strength of foreign policy. Now, they’re reaping the gut reaction of Americans who don’t need to know the policy details: they’re seeing the Middle East on fire, and dead American diplomats, and it shows in the polling.

But hey…did I mention Barack Obama killed Bin Laden? You might not have heard.