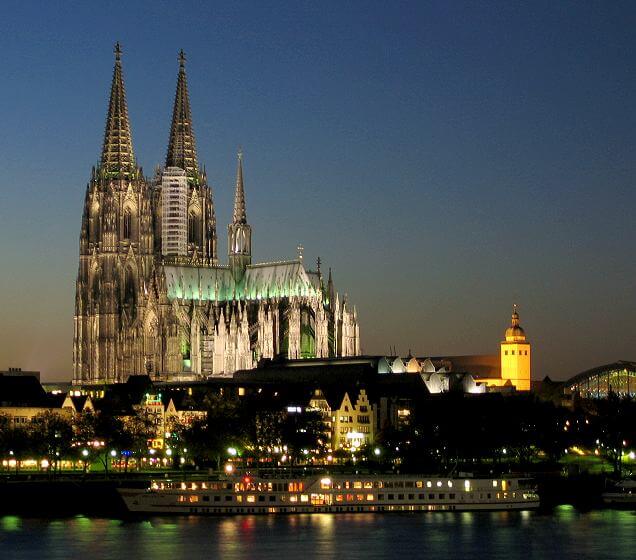 It isn’t often that stone steps inspire chills, but to walk where centuries of human feet have literally worn down the stone is to simultaneously become part of history and to realize one’s utter insignificance to it.  Walking up the steps and into the magnificent structure, the eye is drawn inexorably from the stones below, upward, high beyond the massive columns, up further where the very walls seem to tilt toward each other and meet at dark, dizzying heights.  It was 1989, and I was standing inside the massive cathedral in Cologne, Germany.

I had just finished reading a biography of German WWI ace Barron Manfred von Richthofen in which he described his very first airplane ride as a student pilot.  As the plane rolled out for takeoff, the prop wash blew Richthofen’s leather helmet off, along with his goggles and scarf.  As the plane rose, and his gloves were also lost to the blast of wind from the propellor, his attention turned to that of viewing the landscape from the air for the very first time.   And he wrote of his astonishment at seeing the spires of the Cologne Cathedral from a great distance. That Cathedral had been there over 600 years when The Red Barron’s canvass and wood plane did battle in the First World War.  Those old stone steps were as old as the US Constitution by the time Christopher Columbus set sail for the New World.  And yet there we stood in 1989, struck dumb it seemed, trying desperately to comprehend the sheer size and endless intricacies of this colossal structure which literally dwarfed everything around it.  To view it from the outside is to feel rather like an ant contemplating a redwood. To venture inside and see The Shrine of the Three Holy Kings (purported to hold the crowned skulls of the Three Wise Men), or the Gero Cross which dates back to 976, or the legions of statues, is to become virtually intoxicated with the divine devotion that conceived and constructed such a solemn place.

Where is there anything in modernity to compare?  Camille Paglia poses just such a question, asking (and answering) the question of why so much of our fine arts have devolved into a “wasteland.”  “Painting was the prestige genre in the fine arts from the Renaissance on.  But painting was dethroned by the brash multimedia revolution of the 1960s and ’70s,” writes Paglia, who then zeros in on a central point:  “What do contemporary artists have to say, and to whom are they saying it?  Unfortunately, too many artists have lost touch with the general audience and have retreated to an airless echo chamber.”

It’s a chamber where the avant-garde first yielded to iconoclasm, which in turn has yielded to unimaginative and vulgar conformity.  One need look no further than the artist who submerses a crucifix in urine, and then congratulates himself for bravely giving the finger to orthodoxy, all while carefully avoiding a cartoon of Mohammed so as to avoid getting his head chopped off.  So much for breaking new ground.

So where do we now turn for art?  Snoop Dog? Our smartphones?   I use my smartphone constantly.  Thanks to technological wizardry, I can have a conversation with the thing (it even says, “Who’s there?” when I say, “Knock knock”), but art it isn’t.  Among my personal effects is an old pocket watch that belonged to my great grandfather.  A functional piece, it retains just enough ornate decoration to hearken back to another time and place.  As long as that old watch is around, I feel grounded somehow, which is a feeling that so much of what passes for art fails to elicit.  Now, am I channeling my inner fuddy-duddy, or is society losing something?  Where art once celebrated eternal truths, what is its point today?  To rail against the culture and system that enables it?  Again from Paglia:

Capitalism has its weaknesses. But it is capitalism that ended the stranglehold of the hereditary aristocracies, raised the standard of living for most of the world and enabled the emancipation of women.  The routine defamation of capitalism by the armchair leftists in academe and the mainstream media has cut young artists and thinkers off from the authentic cultural energies of our time.

“We do not consider ourselves a Christian nation, a Jewish nation, or Muslim nation,” said President Obama, adding, “We consider ourselves a nation of citizens.”  This ideology that seeks to disconnect an entire people from their heritage and culture is the same ideology that teaches students to ridicule and scorn the very system that has afforded them a standard of living and a wealth of knowledge that previous generations could never have imagined.  To defeat that ideology is to make possible the day when abiding truths are celebrated and the arts again, as in the past, lift the human spirit up, up toward the Author of all that is truly beautiful.

— If you wish to join the conversation on this post, we invite you to click here to sign up for a One-Month Free Trial Offer. –.  Enjoy great content and podcasts, post your own opinions, converse with leading figures on the Right, and much more. Ricochet – The Right People. The Right Tone. The Right Place.