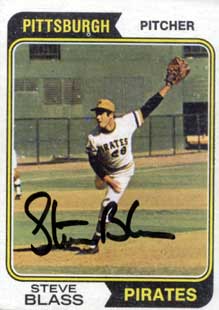 According to the narrative of most journalists, President Obama has developed the political equivalent of Steve Blass disease. Blass was a Pittsburgh Pirates hurler who came up in the late Sixties with a bang – he won eighteen games in 1968, including seven shutouts, and threw two complete games in the 1971 World Series, allowing only seven hits and two runs. He finished second on the team MVP voting behind only Roberto Clemente. But two seasons later, Blass lost his control practically overnight, taking on a bizarre inability to throw strikes. There was no explanation for it — the stud pitcher suddenly was walking nearly a batter an inning. The New Yorker piece on the tragedy illustrates his desperation:

He consulted a psychiatrist, an optomotrist, unusual forms of pitching practice, tried transcendental meditation & hypnosis… His collapse is unique, no other player in recent baseball history has lost his form so suddenly & never recovered it.

The reason I don’t buy the conventional wisdom that Obama will bounce back and win the debate tonight is because I don’t think he has Steve Blass disease. I think he lost his fastball long ago, if he ever had it. Molly Ball is one of the few journalists to notice that this really is the Obama who’s been here all along; the press (and therefore the people) just haven’t noticed.

At the Univision forum, host Jorge Ramos pressed Obama hard on his failure to enact immigration reform, and Obama had no good answer. “You did not keep your promise,” Ramos charged. Obama responded with a rambling answer about how busy he’d been with the economic crisis and how little cooperation he got from Republicans. Ramos didn’t let him off the hook: “A promise is a promise,” he said. Obama’s answer was an airless civics lesson… Elsewhere in the Sept. 20 interview, Obama made the startling statement that “you can’t change Washington from the inside, you can only change it from the outside.” He blamed the deadly storming of the Benghazi consulate on reaction to an incendiary American-made video even though other members of his administration had already begun describing it as a preplanned terrorist attack. He went rather easy on Romney for his recently revealed “47 percent” comments. And the president was greeted by a markedly less enthusiastic response from the audience than Romney had gotten the night before; Romney’s campaign had packed the room with supporters while Obama’s team didn’t bother… All of these comments were minor slips at worst, but they showcased a president who was less than quick-on-his-feet in the less demanding format of a national television interview.

And now he needs a knockout. But he won’t get it.

My expectation for tonight is that Obama will again underperform expectations. More Americans expect the old, fraudulent image of “everything to everyone” Superman Obama to show up. But put me down for the small portion of bettors who think the president will make the mistake of overcorrecting, coming across as petulant, personal, and small-minded where he wants to seem tough. A townhall debate is not the format to go gunning after Romney on his business career – you want to seem empathetic, hopeful, inspiring in a townhall, not crassly political and aggressive. Al Gore learned this lesson the hard way (Dingell-Norwood!).

The real concern for Obama ought to be showing the American people that he has a policy vision for his second term that really will turn things around.

In a stark warning on the eve of the second presidential debate, veteran Democratic strategists Stanley B. Greenberg and James Carville write in a newly released memo that the campaign “has reached a tipping point” that could cost President Obama reelection if he does not present a more compelling vision for the next four years. “The first debate really did disrupt the race and presents a painful real-time test of what happens when the president tries to convince people of progress and offer[s] a very modest vision of future change,” the two say in a Democracy Corps memo cowritten with Erica Seifert, a senior associate at Greenberg’s polling firm. “Voters are not looking for continuity, but changes that help the average Joe.” In an interview, Greenberg said that at the first debate, Mitt Romney caused many voters who are worried about the nation’s direction to view him in a new light, mostly by convincing them he had aggressive plans to improve the economy — even as Obama conveyed little about goals of his own.

The memo is here.

Obama’s initial strategy of using surrogates and ads to drive down Romney was wise because it largely insulated the president from having to make the case himself. If he chooses to do so tonight, and fails, his campaign may not be salvageable.

This essay was adopted from The Transom, a daily email newsletter for political and media insiders, collecting news, notes, and thoughts from around the web.

— If you wish to join the conversation on this post, we invite you to become a Ricochet Member.  Enjoy great content and podcasts, post your own opinions, converse with leading figures on the Right, and much more. Ricochet – The Right People. The Right Tone. The Right Place.