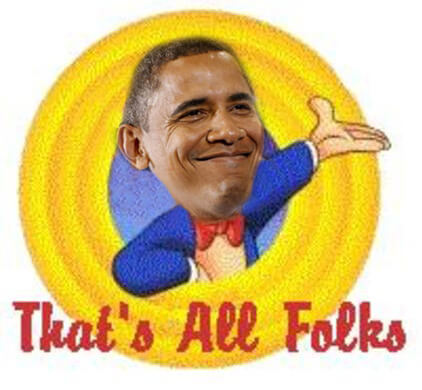 Calm isn’t quite the right word. Peace? Yes, I’m at peace.  The people were presented with two diametrically opposed philosophies. To employ a sports phrase, our side, “left it all on the field.” We highlighted the plans, failures, illegalities, and abuses of the statist. Where the major media failed, we stepped in. We countered utopian platitudes with facts, and answered entitlements with opportunity. After hundreds of columns, endless hours writing and researching when I should have been resting to meet the demands of life on the road, countless conversations with friends and family, and a multitude of prayers for my country, there was nothing left, save for the people to decide.  And they did.

Mitt Romney is a sterling man who loves our country. I have no ill words or thoughts for him, and no Monday morning quarterbacking. He made the best calls he could while in the arena, under the white hot lights of scrutiny from friend and foe alike. He didn’t need the stress, the hassle, or the expense of running for office and could have easily retired and waved at the world as it passed by. But he put a personal stake in the future of America, and for that I am grateful. But he was outnumbered. We all were outnumbered.

My mistake, and the mistake of a great many of us on the right, was to think that a majority of Americans still believed in the country as it was founded. They don’t. The sacrifices of men at Valley Forge, on the beach at Normandy, or landing at Inchon, were all washed away on election day, leaving only the stark warning of Benjamin Franklin that, “Only a virtuous people are capable of freedom. As nations become corrupt and vicious, they have more need of masters.”

They will get their masters. On the night of the election, a young man wearing a mask walked into a convenience store in Warren, Ohio, pointed a gun at a customer and robbed him before pointing the gun at the clerk and admonishing him to,”Vote for Obama.” These are the people who carried the election. Meanwhile, in Detroit, eight-time convicted felon and lifelong Democrat Brian Banks was elected as State Representative for the 1st District. Good. He’s a credit to the constituency that elected him. May they all enjoy the hell they have created.

As the days and weeks pass, we on the right will examine what happened and be told what should be done next. Some have suggested we change our messaging, on immigration for example, hinting (though not coming out and saying) that an insistence on securing the nation’s borders, or a resistance to rewarding the breaking of our laws, alienates the Hispanic vote. Let them put action to words then, and move to the border towns I travel to, and sleep with the doors as unsecured as the border. For we already have a pretty good idea what happens when we suggest watered down liberal ideas and policies, don’t we?

We suggest amnesty and they offer in-state tuition. We offer in-state tuition and they offer free education. On social issues, it’s the same. It was demanded that we give public approbation to private behaviors, and when we try to accommodate those demands, the demands only increase.  Hence, the progression from civil unions to same-sex marriage, which progression will not stop, I suppose, until people start marrying  aardvarks. We now have a majority of people who vote their biological plumbing, and on the basis of which party can produce the niftiest incarnation of Santa Claus. We can’t out-liberal the liberals.

So what to do? For me, there are two answers, one intimate and the other public. On an intimate level, to people I know personally who supported this man, my message is simple: good luck. In the words, of Samuel Adams, I will not seek, “… your counsel or your arms. Crouch down and lick the hands which feed you. May your chains set lightly upon you, and may posterity forget that you were our countrymen.” May you enjoy your rendezvous with the government functionary who will weigh your age and health against the expense of whatever medical procedure you will need. You earned it. But my children and grandchildren didn’t earn it, yet you’ve foisted that awful and ghastly fate on them as well. For that, you have my undying contempt.

On a public level, recognizing with shame that it is my generation that has consigned a great country to darkness and servitude, I can only continue the fight. At some point, events will run their course. The currency will be devalued into meaninglessness by repeated mass printings, the debt will be called, the loot which the takers now demand will dry up, and the country will implode. Perhaps out of the ashes, a few voices will be heard reminding all that it didn’t have to be like this. It is my hope that Ricochet will be among those voices, and that mine will be among yours.

Though this generation is lost, the fight continues for the next, or the one after that. As long as I have a voice, I will be using it to remind everyone that it didn’t have to be this way. Recalling Winston Churchill’s remark that, “I like a man who grins when he fights,” I look forward to engaging along side the rest of you. And as my friend Alphonse says, “May God bless da hell outta you.”