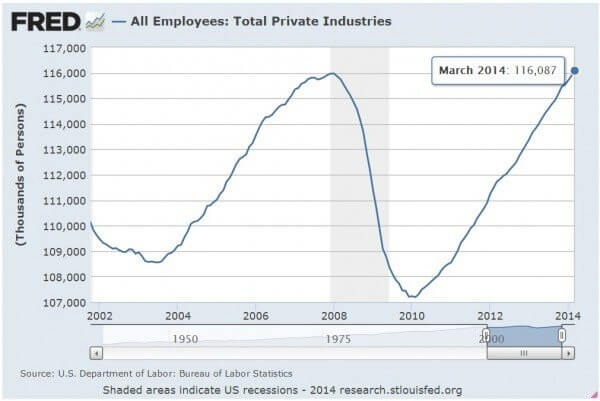 What’s more, we are nearly four million full-time jobs — both public and private — short of prerecession levels, not even assuming a stronger recovery. Just 81% active US workers have a full-time job versus 83% in November 2007. And, don’t forget, another 4 million Americans are long-term unemployed.

Another way to look at it: monthly payroll growth has averaged 178,000 this year vs. 185,000 in the 2011-2103 period. At that pace, it would take nearly six years to return to prerecession employment levels, according to the Hamilton Project’s jobs gap calculator. Overall, then, few signs of economic acceleration, though plenty of Wall Street economists think both GDP and jobs growth will pick up in coming months. We can only hope. But for now there is no reason for Washington policymakers to consider America’s economic emergency anywhere near over, even if the Great Recession technically is.