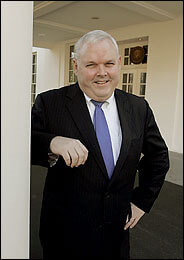 When I arrived in Washington in 2007 to interview for a speechwriting position in the Bush White House, I was an absolute wreck. I had flown into D.C. late on a Sunday night so that I could go in early on Monday morning, immediately jump on a plane back to Los Angeles, and make sure that — having missed only one day of work — my employer at the time wouldn’t catch on to the fact that the President of the United States was making a play for one of his employees. This was a particularly salient consideration given that I was sure I wouldn’t get the job.

Being barely 24 at that point — and never having worked in government beyond the state level — my heart was in my throat the entire time. The late night flight didn’t help. By the time I got into my hotel in Georgetown it was nearly midnight. I was supposed to arrive at the White House at 6 AM. I set seven alarms that night. I am not exaggerating.

The next morning didn’t dampen the surrealism of the experience. Stopping into the Starbucks across the street from the White House pre-dawn, the only people in the joint were myself and Helen Thomas (at which point I had to wonder whether this was confirmation that I was having an authentic Washington experience or confirmation that I had, in fact, overslept and was trapped in a night terror. Thank God that most of her years in the White House Press Corps pre-dated HD cameras).

When I arrived at the White House, I had expected to be guided in by someone. Instead, they moved me through security and I walked the North Lawn alone to the front doors of the West Wing as the sun rose over the executive mansion. In written form, I know this sounds like a moment of glory. Perhaps it would have been for a sturdier soul. For me — raised far from the trappings of political power — it was an epic battle with incontinence.

The reason I tell this story now is so that you have a sense of just what kind of man it would have taken to put you at ease in such a sensory maelstrom. That man was Bill McGurn, who, from the moment I was in his presence, made me feel as if I was visiting an old friend for a casual lunch.

The old saw has it that you spend your first few months in Washington asking “How did I ever get here?” and all the time from there on out asking “How the hell did everyone else get here?” That latter thought never crossed my mind in regards to Bill. He is the kind of man you imagined in government back during your childhood, before you knew that virtue could be a fireable offense in Washington.

McGurn previously served as chief editorial writer for The Wall Street Journal and currently writes speeches for News Corp chairman and CEO Rupert Murdoch. He will replace Bob McManus, who intends to retire next month after twelve years in the editor’s chair.

The Post, already a fine paper, has made an exquisite decision. Where a first-class writer would have sufficed, they have instead picked up a first-class writer and a man of integrity, grace and wisdom. His virtues are such that I think you can even forgive him the misfire of my employment.