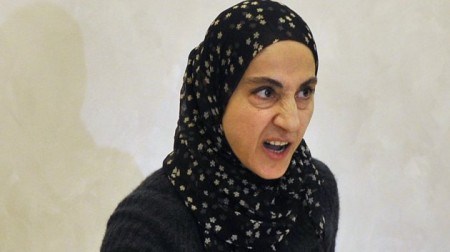 Now, how’s that for assimilation?  If that doesn’t give you an All-American warm fuzzy feeling, then you haven’t been eating at the right diners. “Allahu Akbar,” in case you were wondering, is the Official Greeting of fanatics and savages everywhere who take it upon themselves to evangelize on behalf of the Religion of Peace. It’s sort of a Middle-Eastern “How-d’ya-do!” that you might hear just before, say, an Islamist Army major evangelizes by shooting and killing 13 people, or right before another aficionado spreads the good news by sawing a person’s head off, or yet another disciple flies a civilian airplane into a building.  And to think we used to worry about guys on bicycles handing out leaflets.

So it was only natural that Zubeidat Tsarnaeva, one-time resident of Cambridge, Massachusetts, sent us all a big ol’ “How-d’ya-do,” after her sons set off bombs in the middle of the Boston Marathon, for which trouble one died and the other landed in the hospital. “I thought America was going to protect us, our kids,” she cried. “It’s going to be safe for any reason.  But it happened the opposite.”  Well, Ms. Akbar, things do tend to happen the opposite when you counsel your children in the ways of radicalism, no?  Evidently, in 2011, Russian authorities intercepted a phone conversation between Tamerlan Tsarnaeva and his mother in which they discussed jihad in rather nebulous terms. There have even been reports that she tried to talk her blossoming young bomber into enlisting in the Palestinian cause. Alas, he instead opted for the Bill Ayers tenure track, which was derailed when his younger brother ran him over with the car during the ensuing skirmish with the police (earning him the nickname “Speed Bump”).

“The mother in my judgement has a role in his radicalization process in terms of her influence over him and fundamental views of Islam,” said House Homeland Security Committee Chairman Michael McCaul. But there she is on television, wailing and lashing out that, “America took my kids away from me.” But she is a grieving mother, and so a few unhinged moments are to be expected. And she gets extra leeway for being nuts to start with, so certain incongruities are to be expected. But what are we to make of the incongruity of having taxpayers pick up the tab for feeding this lovable little family of terrorists via the food stamp program? In fact, how much of the travel, training and material used by the bombers was financed by lawful and productive citizens at the point of the IRS’s gun? And while we’re at it:

How is it that Tamerlan Tsarnaeva was placed on the main US terrorism watch list at the request of the CIA, and yet our government had to publicize his photograph and ask our help in identifying him?  Does this inspire confidence?

Speaking of incongruities, did you know that your tax dollars are going to the production and distribution of Spanish language flyers from the USDA in Mexico promoting our food stamp program and advertising that, “You need not divulge information regarding your immigration status in seeking this benefit for your children.” Now, the fact that our government is working with Mexican authorities to advertise our compulsive support of illegal aliens through the food stamp program is not an incongruity. It’s an outrage. The incongruity lies with politicians who advise us to trust that the latest behemoth of immigration legislation will, A) work, and, B) be enforced by an administration that famously picks and chooses which laws to enforce, which to ignore, and which to rewrite.

Incidentally, did you hear the one about the immigration agents who are suing the Obama administration? Immigration and Customs Enforcement employees, who were specifically not invited to help fashion the new immigration legislation, have taken the administration to court over its “Deferred Action” initiative, which has essentially hamstrung the agency’s ability to do it’s job. Well, US District Judge Reed O’Connor has surmised that the suit is likely to succeed, and so has asked both sides in the case to file additional arguments by May 6. “The court finds that DHS does not have discretion to refuse to initiate removal proceedings,” Judge O’Connor wrote, insuring his own vilification for failing to secure the votes of what Jay Leno called, “undocumented Democrats.” Maybe the USDA can help with that incongruity too.

Or how about the incongruity of lawmakers who jammed an unpopular health care law down the throat of an unreceptive citizenry, maneuvering behind the scenes to exempt themselves and their staffs from the exchanges they themselves mandated? As premiums continue to rise and the nightmare of throwing these colossal chains on the populace unfolds, it’s understandable that they would want to be exempt. Who the hell wouldn’t? But it takes a special kind of hubris for the authors of this insult to liberty to try and squirm out from under its crushing weight. There’s a word for people who trample on the freedom of their citizens while exempting themselves.

And speaking of little tyrants, Mayor Bloomberg, who would limit your drinks, trans-fats, and the pain meds doctors may prescribe at the hospital, took another expedition into transcendental demoralization recently.  We live in a complex world,” said New York City’s billionaire babysitter, “where you’re going to have to have a level of security greater … our laws and our interpretation of the Constitution, I think, have to change.”  It’s tough to explain to progressives that the law of the land is no more a living document, subject to the whims of temporary politicians than, say, your mortgage or car loan. It is a contract. Perhaps it would be best to ask Hizzoner to explain what incongruity there would be in New Yorkers adopting his approach and exercising their own right to “change” their “interpretation” of his edicts and rules? Somehow, I think he would be less than receptive.

Perhaps the ultimate incongruity occurred when Barack Obama became the first “sitting” President (if only he’d just sit still for awhile and stop screwing things up) to address Planned Parenthood. When the man who only weeks ago said in the wake of the Boston bombing, “In the face of those who would visit death upon innocents, we will choose to save and to comfort and to heal,” praises an organization that cannot bring itself to repudiate infanticide, we have an incongruity the size of which would allow me to parallel-park a semi. But we have a further insult when that same organization hears the words, “God bless you,” from a United States President.

The incongruities of life in what Mark Levin appropriately calls a “post-constitutional” America are startling. From Ms. Akbar and her food stamp bombers, to a government that places them on a terror list and then shows us photos asking who the hell they are; from a government that advertises freebies to illegals while forcing us to pay the bill, to lawmakers who try and excuse themselves from the miseries they impose on the rest of us; and from elected servants who treat the Constitution as if it were written on Silly Putty while expecting their own rules to be etched in stone, to a President who invokes the Almighty’s blessings on an organization that has made peace with infanticide, the warning of Thomas Jefferson becomes terrifyingly prescient: “I tremble for my country when I reflect that God is just; that his justice cannot sleep forever.”