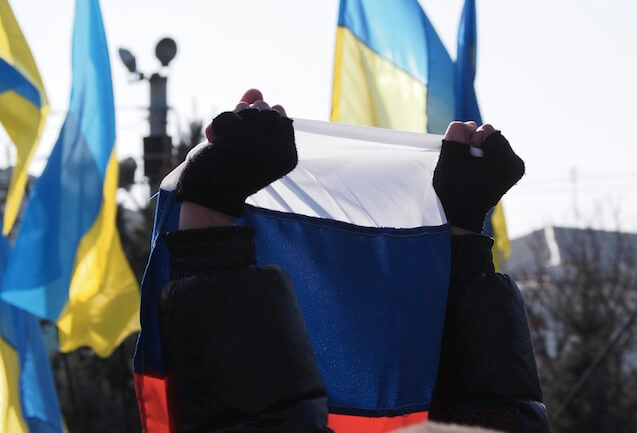 I have to take issue with Ron Paul’s extolling the virtues of the recent independence vote in the Crimea. While independence may be the mood of the citizens of the Crimea, a vote to join the country that has just invaded and occupied you, while the troops are still there, is illegitimate. The Crimea vote a scam. Self-determination is great thing. More places should declare their independence from far-away capitals, as Venice has recently done. But such a vote should never be done at barrel of a gun.

Russian actions during the current crisis are unacceptable.

Despite heated rhetoric coming from interventionists, it is necessary to remember two important facts:

1. Russia is not Nazi Germany.

Russia is not a world power, the modernity of its military is dubious, it is not highly organized, and it does not have any specific ideology. It is a corrupt kleptocracy living off the ruins of a formerly highly organized state. It is a third world country, the decaying ruins of a superpower. Vladimir Putin is not Hitler or Stalin; he is just a corrupt thug. He is a highly intelligent and wily thug. He is a skillful and dangerous player of the game of power politics. But he’s just a thug.

This isn’t to say that this crisis in the Crimea should be taken lightly. I only mean to throw the cold water of reason onto the fires of rhetoric I have heard recently about the potential of Vladimir Putin to retake the Baltic states, reclaim Finland, and overrun Eastern Europe. He’s not about to do that.

He’s not about to do that because it would mean going to the mattresses. It would mean an all-out war. And that would mean a nuclear war, the apocalypse, the end times, and all that accompanies it.

But let’s suppose it doesn’t get as far as a nuclear war. It would certainly mean a Red Storm Rising scenario, a full scale conventional war. But Vladimir Putin would not risk that either (not because he isn’t a jerk, he is) but because he knows that Mother Russia would get the worst of that.

Despite its size, Russia has the same GDP as Italy. A war would mean Russia takes a massive hit economically. Putin can’t afford that, because his legitimacy and his power structure relies on a functional and growing economy. Because of the rapid increase in energy prices during the last decade, he’s had that. Russian GDP growth had already stalled before this game with  Ukraine started costing Putin money and therefore legitimacy. The value of the Ruble and his own stock market have taken hits. Foreign capital is divesting, not wanting to be associated with this regime and its thuggery.

But still, Russia had annexed the Crimea and even John McCain admits there’s no military solution to the current crisis. So what is to be done about it?

To understand the solutions to the situation, one must first understand how we got to this point. How is it that Russia has a free enough to march into the Crimea and not provoke a second Crimean war? Aren’t the Europeans willing to put up a fight?

No, they’re not. Because Russia has a ring in their nose. Russia supplies natural gas to Western Europe and it can be very cold in Western Europe without natural gas. And the Russians aren’t shy about playing that card.

Why does this situation exist? Why not just buy from the United States? It’s a source of reliable energy and it doesn’t come with the moral or political complications of dealing with Russia.

Because the United States government stands in the way of exporting energy. Crude oil produced in the United States cannot be exported by law, a ban passed four decades ago, after the Arab oil embargo. And exporting liquid natural gas requires expensive and time-consuming permits. This situation, the lack of a reliable alternative, is what put that Russian ring in Europe’s nose.

First, I need to address something. It seems to be the trend lately to refer to libertarian foreign policy as “isolationist.” This is, at best, an incorrect usage of the word. At worst, it is a deliberate attempt to slur people.

In order to be an “isolationist,” you need to advocate two things:

Plenty of libertarians are non-interventionists; very few are isolationists. Isolationism includes an disposition toward forced disconnection from the rest of the world. Protectionism means using government force to impede or prevent people from peaceful free exchanges of goods, capital, people, or ideas for mutual benefit. Such use of force is the antithesis of libertarianism.

So what would a libertarian solution to the crisis in the Crimea be?

First: An understanding and an acceptance of the fact that, in life, sometimes there isn’t a solution to every problem.

Second: The same libertarian solution to every other problem: more freedom.

I sometimes worry that “more freedom” is too simplistic an answer to problems, so let me elaborate what that would mean as applied to US foreign policy, especially in this particular situation.

Free trade and free movement of people, capital, and ideas means closer ties between nations. If the United States had unrestricted free trade with Ukraine, not only would Ukraine be richer and therefore in a more powerful position, with the means to defend itself, it would be oriented westward instead of eastward. Free immigration means people would be free to come and go, back and forth, visiting, traveling, teaching, sharing ideas, techniques, technology. And it would mean that, if Ukraine is invaded, they know they can flee to safety and freedom in the United States.

All of this means closer ties with the west and less dependence on Russia. So when Russia shakes its stick in Ukraine’s direction, they can collectively tell Russia to go to hell, and trade and exchange freely with nations and people who respect them and their freedom.

Free trade would also mean a lifting of the United States’ nonsensical crude oil export prohibition and an end to its cumbersome and expensive liquid natural gas exportation permit process. In the absence of such restrictions, Western Europe can freely import American energy and Americans can get fat and rich selling to them. Russia would no longer have that ring to lead the Europeans around by.

The overall result is a freer, richer, and more interconnected world. That means a more peaceful world. (Does that sound like “isolationism” to you?)

In the absence of force as an option, I hear calls for broad economic sanctions against Russia coming from the interventionists. This is also the wrong solution. Why should my freedom, my natural right to trade freely, be restricted because of bad actors in Moscow?

The solution to this situation — the libertarian solution — is more freedom, not less.