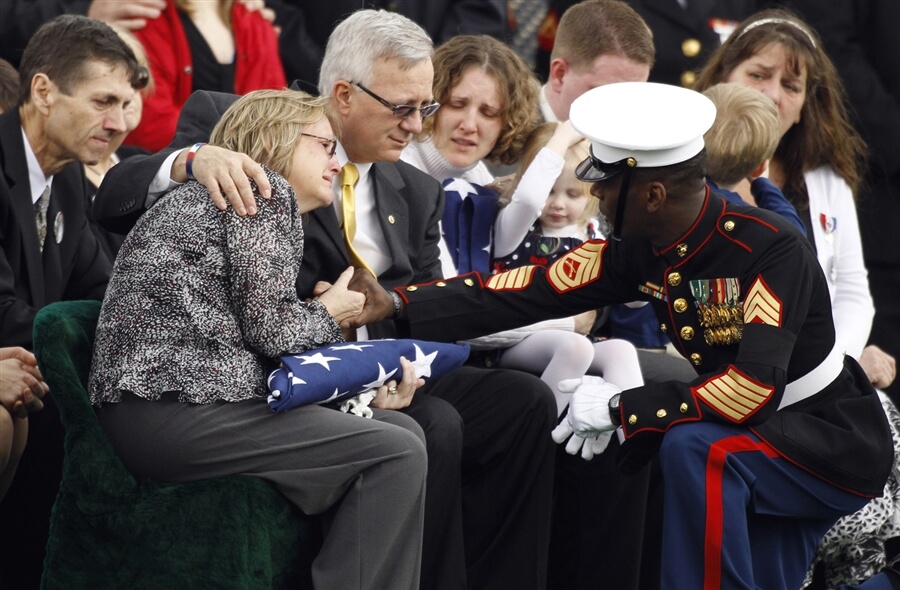 The load assignment was mundane enough. Pick up a load of something or other at a warehouse in Kansas City. I had backed the trailer to the loading dock, no easy task since the dock was inside a large garage-like structure, necessitating a tricky maneuver around the support columns as the trailer made its way back into the building.  The tractor was still outside though, and the sun shining directly into my mirrors made it all but impossible to see whether the back of the trailer, some 75 feet behind me, was lined up properly inside the darkened facility. Tired, and with nerves somewhat frayed, I was placing chocks in front of the trailer tires when I saw a lady standing by the truck looking it over.

“Ah,” I thought, “the Ride of Pride has another visitor.” No matter the time or weather, when people take the time to come look at the truck, I enjoy meeting them. “Good morning, Ma’am!” I chirped. “I work in the office here,” she said with her back to me, “and I just had to see this.”  “You’re welcome to take photos if you like,” I said, adding, “I think the truck has learned to actually smile when someone points a camera at it.” She didn’t have much to say, so I began pointing out various features of the design, and directed her attention to the emblem over the driver’s door that said, “In Honor of Gold Star Families.”

That was when she turned to face me, her eyes moist and ringed in red, her expression betraying the awful strain and burden of heavy loss, and I knew. The lines in her face and around her eyes were the very opposite of “laugh lines.” Her solemn expression spoke years of sadness. “My son,” she stammered, her lips quivering as she struggled to control her emotions. “I lost him in Iraq.” The sentence pierced the soul. What to say? Words can never convey the raw and solemn power of her grief, nor blue eyes that seemed as windows into a yawning emptiness in her heart. I was overwhelmed, the words, “I’m so very sorry,” stumbling stupidly from my lips.

I should have said something uplifting and noble. I should have told her that her son gave his life doing what he was meant to do, and that it falls to the rest of us to honor his memory and sacrifice. I should have unleashed a sonnet of prose, praising this regal woman. I should have said any number of things that would have been well intentioned, but would have rung hollow nonetheless. For mere words and phrases, at that point, would have been no more than tiny drops of rain against her granite mountain of heartache — utterly insignificant to the crushing pain she shouldered. We stood in silence for awhile. “What’s this for,” she asked about some inscription or other on the truck. I explained, walking her around the truck and pointing out various features. “May I take a picture?” she asked.  “Of course,” I answered, adding that the most challenging part of driving this truck is when people try to take photos while they are in the passing lane. Her laugh almost sounded like one of relief. A few minutes later, the photos taken, the tour complete, she said she had to get back to work. We shook hands and I thanked her for her son’s service and sacrifice, as well as her own.

I often think that as harrowing as military service can be, sometimes those of us in uniform have an easier time of it than our families. Military members know what they are signing up for, and they know the price of their work. The pace of events in theater provide little time for reflection or worry. There is a job to do, a mission to fulfill, friends and buddies to look after as the training kicks in and we tend to business.

In Bristol, Virginia, only a couple of weeks ago, a giant of a man walked up to have a look at the truck. The camouflage pattern on his boonie hat was the first give-away. “Marine?” I asked. “Twelve years worth,” came the answer. He had served from 1980 through 1992 and was in the barracks in Beirut when the bombs went off. “I lost my friends there,” he said, adding, “I loved Reagan, but he wouldn’t let us finish the deal.”

“I did Recon,” he said, pulling his left sleeve up to reveal an enormous USMC tattoo that covered his bicep and shoulder. “You stuck around for Desert Storm?” I asked. “Oh yeah,” he said, adding, “Payback’s a bitch, but it was sweet, ya know, thanking them for what they did to my friends.” He said he regretted his decision to separate from military service prior to retirement. “But I don’t think I would have made it. I like being in the [expletive] too much,” he said with a rather deadly smile, reinforcing the reality of what it takes to keep us free. Then, his expression changing, he began talking of comrades he had lost in the bombing. He was taking photos of the the Ride of Pride, when I asked if he’d like me to use his camera to take one of him with the truck. “Would you do that?” he asked, and I was happy to oblige. He didn’t want to actually stand in front of the truck for fear of blocking any portion of the artwork. So this born warrior went to one knee beside the truck. If Heaven isn’t guarded by Marines, it will be mighty disappointing. But for all the service members perform overseas, it’s the families back home who sacrifice their peace of mind and contented souls, who spend hours transfixed to news networks, simultaneously hoping to hear news of their loved ones and dreading what they might hear. They keep the home fires burning, the bills paid, the yard trimmed, and the children cared for when they ask, “When is Daddy coming home?” When Daddy, or Mommy, or a son or daughter, lose their lives in our defense, every day becomes Memorial Day for these families. They deserve our honor and prayers, our kind thoughts and our help, as they continue their own lives with an empty place at the table and in their hearts.

A few years ago, there was a regular caller to Sean Hannity’s radio show. He was a senior citizen named Marty, and he was among those who stormed the beaches at Normandy. Time after time, Hannity would ask Marty to tell listeners about his experience that day, and Marty would always change the subject, eventually signing off with the words, “Take care, my son.” Then, one day, he gave in to Sean’s request. He said that when the door lowered, the first thing they had to do was push the bodies of their friends into the water. You see, the hail storm of bullets cut through the first row or two. As Marty told of having to get through the bodies of his buddies while bullets whizzed all around striking flesh, helmets, gear, and water, his old heart broke anew and he began crying on the air. With a delicate touch, Sean backed away from the discussion and, obviously moved, thanked Marty for his heroism, to which Marty disagreed.  The heroes were the guys who never made it home.

We who remain have an obligation to honor the memory and sacrifice of our fallen, though I would respectfully submit that our obligation extends beyond a moment of silence before a barbecue, or even a solemn remembrance at a cemetery. Our obligation is no less than the continuation of their mission, to ensure that a nation conceived in liberty not only survives, but that it prevails. Brave men and women did not spill their blood and pour out every drop of fidelity to this country so that the IRS could badger and torment American citizens whose political beliefs are antithetical to a government whose prevailing ethos is antithetical to America’s founding. The 2,000 men who died at Valley Forge (two thirds of whom died from disease alone), and those who died at Lexington, Bunker Hill, Trenton, Saratoga, and Brandywine, didn’t give their lives so that their regretful progeny could stand on that holy ground today in Massachusetts, New Jersey, New York, and Pennsylvania and surrender their sovereignty to a government that demands to know the content of their prayers! They didn’t fight for centralized authority, but rather against it. And they sure as hell didn’t scoff at the vigilance required to remain free from tyranny. My dedication to this sacred duty

Is total and wholehearted-

In the responsibility bestowed on me

Never will I falter-

And with dignity and perseverance

My standard will remain perfection.

Through the years of diligence and praise

And the discomfort of the elements

I will walk my tour in humble reverence

To the best of my ability.

It is he who commands the respect I protect

His bravery that made us so proud.

Alone in the thoughtful peace of night,

This soldier in honored Glory rest

Under my eternal vigilance.

May the sentinel’s vigilance become our own, so that even as he guards the hallowed remains of our honored dead, we respect and advance the living principles for which they gave everything.