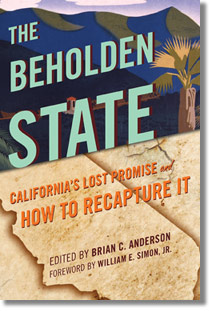 When I moved back to California from Washington D.C. four years ago, I remember being surprised by the fact that this state — which had effectively weaponized liberalism and turned it on itself — didn’t garner more serious, thorough analysis from national conservatives. Thankfully, in the years since, City Journal has turned its eyes west and devoted a lot of time and ink to exactly what’s gone wrong in the Golden State and what can be done to remedy it. This has played out both in the pages of the magazine itself and through the online City Journal California project.

This week, City Journal is releasing a new book, The Beholden State: California’s Lost Promise and How to Recapture It, which compiles around 30 of the best pieces that this project has produced. Ricochet’s own Victor Davis Hanson and Andrew Klavan are among the contributors, as are other luminaries such as Joel Kotkin, Heather Mac Donald, Steven Malanga, and Art Laffer. Yours truly also appears a couple of times.

If you’re a Californian looking for some signs of hope, this is for you. If you live elsewhere in the country and want to understand how liberalism can erode even the most majestic of places, you’ll appreciate it too. And if you’re a corporate recruiter in Texas — well, you didn’t need our help, but you got it anyway.