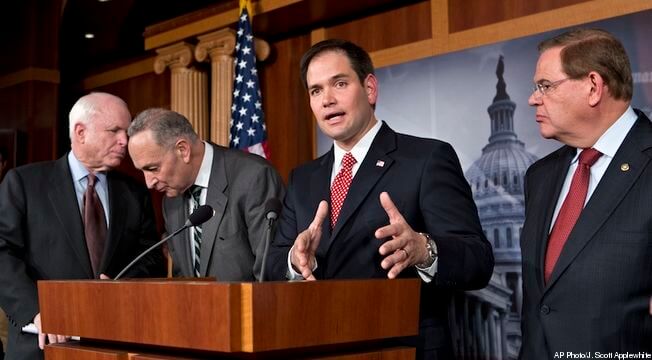 Then there’s the old Cajun story about Boudreaux and Thibodeaux driving down the levee one day, drinking beer and telling lies when they rounded a corner and spied a State Police roadblock ahead. Thibodeaux started to panic when Boudreaux counseled, “Quick, finish you beer, den peel off da label and stick it on you forehead.”  “Mais you been dropped on you head again?” asked Thibodeaux. “Don’t argue,” said Boudreaux, “just put da patch on your forehead, sit down, shut up, and let me handle it.” When they pulled up to the roadblock, the State Patrolman asked, “You fellas been drinking?”  “Mais no sir,” said Boudreaux.  “We used to do dat, but now we on da patch!”

In his “intoxignited” condition, perhaps Boudreaux could be forgiven for thinking the patrolman was an idiot, but our politicians are ostensibly a sober bunch and so lack Boudreaux’s excuse, to say nothing of his happy creativity. These unregenerate scoundrels rammed through a hydra-headed monstrosity in Obamacare, a law so odious that it is killing paychecks and health plans before it even reaches full implementation. From Salt Lake City, where Granite County School District spokesman Ben Horsley says they are cutting 1,000 employees down to 29 hours per week in order to avoid $14 million in additional Obamacare costs that they don’t have, to Congressman John Larson, a Connecticut Democrat who helped pass the abomination but now thinks he and his staff should be exempt from it on the grounds that, “Listen, this is simply not fair to these federal employees,” people are trying desperately to escape the politician’s reach.

Now, a case can be made that federal employees, along with every other employee in the country, should be relieved of the preposterous impositions on property, liberty, and health care that this law exacts. Sober-minded observers on the right have been making exactly that case the entire time. But it takes hubris on a scale that would embarrass even George III for a presumably sober and straight-faced Congressman, who voted to impose the madness in the first place, to insist that federal employees ought to be free from the consequences of their exertions. Perhaps next the federal government will start using its taxing authority to harass and punish citizens on the basis of political affiliation, or use the instrumentalities of the state to harass journalists. Oh wait, …  The President recently admonished us that:

“If people can’t trust us — to do our jobs — then we are going to have a problem here.”

Newsflash to Captain Obvious: We have a problem. The federal government has lost its collective mind, and I offer as as evidence the very latest monstrosity, euphemistically labeled as a comprehensive immigration bill. Remember when liberal brainiac and constitutional scholar Nancy Pelosi established her constitutional bona fides by saying that we have to pass a law in order to know what’s in it? Her position is now the bipartisan approach currently being applied to immigration legislation, all 1,000 plus pages of which were plopped down yesterday afternoon with a vote scheduled for Monday. Thus does the world’s most deliberative body go into full Chinese fire drill mode.

Foolishness of this order is expected from Democrats, who never met a banana republic tactic that didn’t arouse their imperious approval. But when Republicans, who fashion themselves as knowing better, engage in sleight of hand maneuverings behind closed doors with people who are committed to fundamentally transforming the nation into something unrecognizable, the ensuing circus threatens constitutional order and national sovereignty, resulting in demented language like this, from the much-vaunted Corker Amendment:

(f) APPLICABILITY OF CERTAIN GROUNDS OF INADMISSIBILITY.—In determining an alien’s inadmissibility under this section, section 212(a)(9)(B) of the Immigration and Nationality Act (8 U.S.C. 1182(a)(9)(B)) shall not apply.

What seems at first glance to be as innocuous as it is incomprehensible to any citizen who has ever read a tax form, was translated by Mike Flynn at Breitbart.com. Succinctly put, that one sentence, with its maze of numbers, letters and legalese, provides workers who remain in the United States beyond the expiration of their work visas a clear path to citizenship. Whereas people who currently break the law in this fashion are required to go back to their home country and restart the immigration process, this provision not only allows those who are currently breaking the law to remain here, placing them on a path to citizenship but, in a practical sense, renders future visa enforcement essentially useless since future violations lead to citizenship as well. If only the 9/11 attackers who, according to ABC News, were here on visas obtained under their actual names, had waited awhile, perhaps they too could have benefited from the Gang of 8’s efforts.

There’s more, of course. From Betsy McCaughey of the Daily Caller, we learn that Section 3401 erases the one-year deadline for asylum applications, while Section 3504 layers another appellate option for those whose asylum applications are denied. I don’t know about you, but I’m relieved that asylum seekers like those who bombed the Boston Marathon, or Mir Aimal Kasi, who shot two CIA agents in Virginia, will have a longer window of time to ply their trade along with an additional layer of appeals in case the government stops spying on American citizens long enough to catch on to their intentions. But this is the sort of idiocy that passes for the “tough enforcement” Marco Rubio assures us will follow if we will all just take Chuck Schumer’s hand and skip down the yellow brick road to national obliteration.

But wait!  There’s more!  If you’re one of the first 100 idiots to agree to sign on to this madness, you can listen to a recording of  Senator Rubio’s promise that for immigrants to qualify for a green card, they, “have to be able to support themselves so they will never become a public charge.” Then you’ll be handed a copy of Section 245C(b) which waives Rubio’s work requirement for those attending school, or getting a GED, or job training, or taking care of a child, or over 60 years of age, or otherwise unemployed through no fault of their own. In short, it will be tougher to find someone who doesn’t qualify for public assistance under this legislation.

Meanwhile, Section 2106 takes the job of guiding immigrants through the legalization process from the Department of Homeland Security and hands it over to community organizers. One such previous recipient of this responsibility, albeit on a smaller scale, is the Northern Manhattan Coalition for Immigrant Rights, whose mission is to, “build power through citizenship drives and voter registration.” Uh huh. Even Ray Charles would be able to see where that initiative is going. Stay tuned for Supreme Court approval.

As for the supposed stiffening of US border security, about which the bill’s advocates boast loudly, Senator Jeff Sessions’ press release from last night confirms that,  A) the addition of any new border patrol agents isn’t even required until 2017, and B), the bill gives DHS until 2021 to complete the hiring. Meanwhile, legalization commences almost immediately, while requirements to secure the border will be ignored just as surely as Congress has ignored the same requirements from previous laws.

The time for trusting the political class to do that which current law already requires them to do, but which they refuse to implement, has passed. Likewise, the time for quietly yielding to the admonishments of Republicans who insist that they are on the patch, has long since expired. We who resist these infringements against the rule of law and against the sovereignty of our country are incessantly disparaged as ingrates and xenophobic buffoons, oblivious and dumb to the superiority of the preening asses who deign to instruct us on what it is they think we should want. They must be defeated, along with this bill, after which the border must be secured before any conversation can take please regarding what to do about those who are here by virtue of having broken our laws.