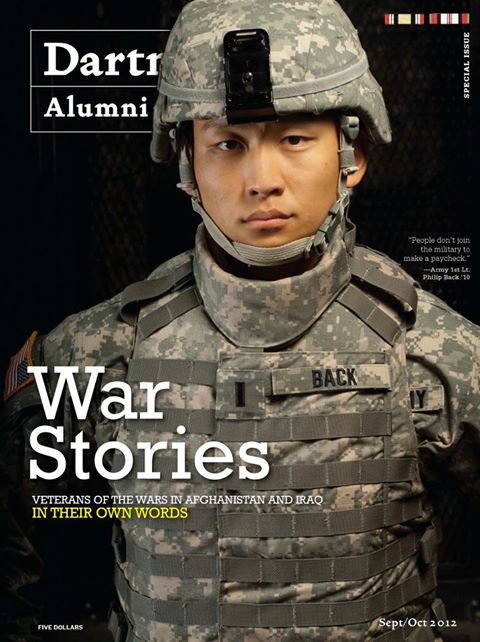 You know what?  My term as a trustee having ended this past June, I feel at much greater liberty to talk about my beloved Dartmouth College. As distinct from certain of its Ivy peers–Harvard, for example–Dartmouth has always retained an ROTC program.  But whereas civilian service represents a pervasive, permanent part of the culture in Hanover–over and over again, the Peace Corps and Teach for America simply bubble up in conversation–the military scarcely ever arises.  The very few young men and women who find their way into the ROTC program–Dartmouth graduates two or three each year–must do so almost entirely on their own, in opposition, as it were, to the wider mood or atmosphere.

But those few students who do graduate with both Dartmouth diplomas and commissions in the U.S. Army or Marine Corps?  Among the most impressive young people I have ever encountered in all my long life. This past June, for example, Joel Malkin ’13 received his commission as a Second Lieutenant in the U.S. Marine Corps on one day–and graduated as a valedictorian of the College on the next.

Or consider Philip Back ’10 (pictured above, he also appears in the YouTube video below).  In February 2010, young Mr. Back sat at the piano with the Dartmouth Symphony Orchestra to perform Rachmaninoff’s second piano concerto.  In June he received his commission as an officer in the U.S. Army and graduated from Dartmouth.  In September, he shipped off to Afghanistan.

Dartmouth is much better in its dealings with the military than most Ivies–whereas Harvard only just recently reinstated ROTC, Dartmouth never lost it, and the College has in recent years covered itself with honor by helping veterans to become undergraduates.  But even at Dartmouth, as I say, Teach for America is in the air while ROTC might as well be hidden off in the woods somewhere.

The Ivies will do anything at all to redress racial or ethnic imbalances.  What about giving the nation more Joel Malkins and Philip Backs?  What about redressing the gap between the culture of New York and New England and the culture of national defense?  What about taking just a step or two in that regard to promote–may I use the phrase?–national unity?