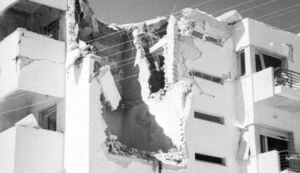 Haaretz has an interesting piece in today’s paper on this day in history. On 9 September 1940, eight years before the State of Israel came into being — when the land from which I write this post was still part of the British Mandate — the Italian air force bombed Tel Aviv, killing 137 people. This wasn’t the only time Mandatory Palestine had been hit — Haifa suffered a dozen Italian air raids over the summer of 1940 — but it was by far the most costly strike in terms of loss of life.

Here’s a little context. Germany was on the ascendant in mid-1940, having invaded Western Europe in May. Belgium and the Netherlands had surrendered quickly, and more than 300,000 French and British troops had been evacuated from the beaches near Dunkirk. In June, the Germans had marched into Paris, meeting no resistance. By the beginning of the summer, all of northern France and the entire French Atlantic coastline down to Spain were occupied by the Germans.

In the meantime, the Lodz Ghetto had been sealed off on 1 May, and on 20 May, the Auschwitz concentration camp had begun operations in occupied Poland.

Throughout the summer of 1940 and into the fall, Hitler was still aiming toward an invasion of Britain, the prerequisite of which was to be the destruction of Britain’s air defenses. Hitler would ultimately fail to achieve air superiority over the RAF, and a German invasion of the British Isles would be set aside permanently — but as of early September 1940, Britain’s fate was still hanging in the balance. On 7 September, the Luftwaffe began the Blitzkrieg — 57 consecutive nights of aerial bombing of the city of London. And on 9 September, Italy — which had joined the Axis in June and was shortly to sign the Tripartite Pact with Germany and Japan — bombed Tel Aviv, in British-controlled Palestine.

The British had helpfully issued pamphlets to the residents on how to respond to an air raid or a gas attack. They did not, however, allow Jews to bear arms (not that rifles or handguns would have helped much during a bombing). More to the point, there were no anti-aircraft defenses over Mandatory Palestine.

The September 9 raid took place at 4:58 P.M., and lasted three minutes, during which time 32 bombs were dropped, from 10 Italian Cant Z1007bis bombers. What was strange about the attack was that all of the bombs fell on residential areas, principally in the region of Bograshov and Trumpeldor streets, with none hitting the port of Jaffa, the natural target. (This didn’t stop the Italians from releasing a statement declaring that “during the raid on Jaffa, port installations were hit and large fires started.”)

According to Italian historian Alberto Rosselli, the original target of the bombers was in fact Haifa, with its port and refineries, but the Italian planes were intercepted by British aircraft. The Italians were then ordered to drop their loads on the Tel Aviv port before returning to base, and the fact that their bombs hit residential targets was simply a mistake. Also hit was the Palestinian village of Sumail, which stood in what is today Ramat Aviv. Seven of the victims of the bombing, five of them children, were from there.

…By the morning of September 10, a Tuesday, 100 bodies had been recovered; 53 of the victims were children. In the coming days and weeks, another 30 Tel Aviv residents died of their injuries….

Condemnations of the bombing came in from Winston Churchill, the British prime minister, and from President Franklin D. Roosevelt. That same week, by coincidence, the British began to recruit Jewish residents of the country to undergo military training, and fight with the Allies. Several days after the Tel Aviv attack, British planes made retaliatory raids against the Italian bases in Rhodes and Leros.

Many Jews in Palestine were eager at the time to assist the British in fighting the Axis, but the British were extremely reluctant to permit the establishment of a Jewish brigade. (Remember that the White Paper was still in effect at this point.) A Jewish brigade did not come into existence within the British Army until 1944, when Churchill — “moved by the slaughter of Hungarian Jewry [and]…hoping to impress American public opinion,” according to historian Rafael Medoff — consented to its establishment. The Jewish Brigade’s first engagement was in November 1944, when it joined the British Eighth Army in the final offensive against the Germans in the Italian Campaign.