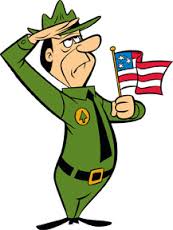 The National Park Service was established in 1916 with a bill that mandated the agency “to conserve the scenery and the natural and historic objects and wildlife therein, and to provide for the enjoyment of the same in such manner and by such means as will leave them unimpaired for the enjoyment of future generations.”  The Roosevelt Arch at the northern entrance to Yellowstone Park is inscribed as follows: “For the Benefit and Enjoyment of the People.”

No one at that time could imagine a scenario in the future where employees of that agency — on behalf of the federal government — would be engaged in acts of strong-armed intimidation of innocent visitors enjoying parks and monuments the public owns and pays for.

If you’ve been following the news since the faux government shutdown, you’ll know I’m not exaggerating.  In addition to locking up open-air monuments like the World War II Memorial and threatening to arrest 80-year-old veterans, the NPS has spent extra staff time and money (during the aforementioned “shutdown”) putting up fences and barricades on public roadways in attempts to deny Americans the pleasure of even viewing national treasures like Mt. Rushmore, the Grand Tetons, and the Grand Canyon — from the road.

One of the worst example of NPS thuggishness occurred in my neck of the woods, Yellowstone Park, where rangers ordered seniors and foreign visitors back on their tour bus and accused them of “recreating.”  Not only that, the busload of guests were ordered to not venture outside of the Old Faithful Inn, lest they see the famous geyser erupt. Armed NPS rangers stood outside the doors to make sure it couldn’t happen. Some of the foreign guests thought they were under arrest, and some seniors said they’d witnessed “Gestapo tactics.”

There’s long been a sickness in the National Park Service. I once heard a ranger explain to a fellow bureaucrat in Yellowstone that the NPS could really run the place well “if there weren’t all these damned people in it.” Another time, while interviewing park law enforcement for research for a novel, I was told by the highest-ranking park cop that he thought of his rangers as a “small army” that “could hold their own.” This, while showing off his massive armory of automatic weapons, combat shotguns, and tactical SWAT gear.

How did the NPS go from an agency charged with managing our national parks “For the Benefit and Enjoyment of the People” — to a para-military force that would do this?

Is every NPS employee a thug? Of course not. But when the faux-shutdown ends I don’t think Americans will think of the NPS as benevolent Ranger Smiths of Jellystone Park ever again.