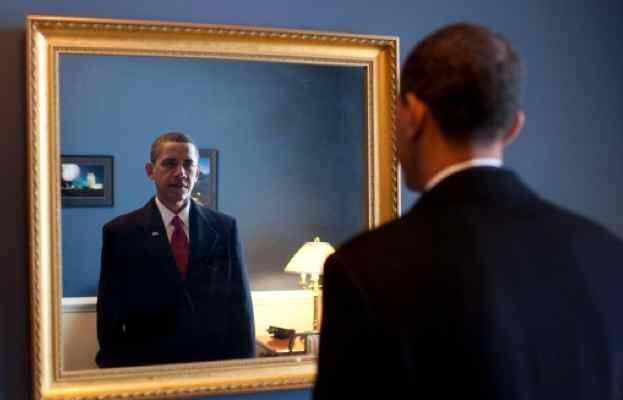 In David Maraniss’ largely hagiographical account of Barack Obama’s family and his upbringing, there is a chapter entitled “The Moviegoer,” which deserves careful attention. In it, Maraniss limns one crucial aspect of the man’s character—his propensity to stand back, aloof, and observe his own conduct and that of those about him as if he was the director of a film. He is, in fact, our first postmodern President, and he is always looking in the mirror. He believes that thinking makes things so. He believes that the most important part of the universe within which we live is the imagination. And when things go amiss, he is apt to tell his aides not that he or they have blundered in their deeds, but that they have “lost the narrative.” Everything is always about the man his aides call “Obam-me.” He is the Prophet of “Change We Can Believe In.” Belief is the operative word.

There is something to be said for this species of Idealism. Our imaginations are exceedingly powerful, and we can easily enough be bamboozled by those with an expertise in the deployment of words. Barack Obama has demonstrated this time and again, and he understands, better than any American politician in my memory, that what he resolutely refuses to mention or mentions only once in passing and never touches on again may simply disappear down the memory hole. What ever happened to Fast and Furious? to the IRS scandals? to the Benghazi blunder? to the Associated Press wiretaps? You and I are aware of what is going on, but the general public has only a vague and hazy memory of these scandals.

It helps, to be sure, that the press is servile—eager to provide cover for the Administration at almost every moment. But that is not the whole story. Barack Obama’s “no drama” pose works. It works very, very well. Sooner or later, however, reality bites. Sooner or later, something happens that touches the material interests of individuals in a way they cannot willfully ignore. Sooner or later, something happens that causes all but the most blind partisans to step back, pay attention, and rethink. It is like that moment in The Wizard of Oz when Dorothy sees behind the curtain. You and I have long been aware that the country is being conned. We knew that the President was lying when he told Americans on 24 occasions, in no uncertain terms, that they could keep the health insurance that they had. We knew as well that he was perfectly aware that he was peddling a whopper, and everyone in our larger political class knew so as well. The mainstream media knew, and they helped him sell his lies.

The Republicans in Congress knew, which is why, two years ago, they proposed a bill guaranteeing that one could keep one’s insurance and, at a brief moment of strength, forced every single Democrat in both the House and the Senate to go on record voting against it. You may want to think that John Boehner and Mitch McConnell are fools, and they are certainly not above criticism. But they do not lack cunning.

The only ones who did not know were the ordinary folks out there. Most of them are relatively apolitical, and they took a certain pride in electing our first black President and were willing to cut him a great deal of slack.

Unfortunately for Barack Obama and the Democrats, reality has begun to bite, and the lies they told are coming back to haunt them. It is fascinating to watch the Great Prevaricator—which is what Barack Obama is—attempt to weasel out of this one. First, he and his minions lie outright, denying in the manner of a Bill Clinton befuddled by the meaning of the verb “to be,” that they have said and done precisely what they said and did. When that did not work, the President began making apologies that were not really apologies, and the shameless hacks at The New York Times began telling us that the President “misspoke.”

Consider what the President put it in yesterday’s press conference,

With respect to the pledge I made that if you like your plan you can keep it, I think — you know, and I’ve said in interviews — that there is no doubt that the way I put that forward unequivocally ended up not being accurate. It was not because of my intention not to deliver on that commitment and that promise. We put a grandfather clause into the law but it was insufficient.

This is to compound one lie with another. It was the President’s intention to fool people. Had the public known that millions of Americans would lose their insurance—that the bill made it illegal to offer major medical and nothing else, for example—they would have erupted in such a fashion as to make the Tea Party Movement look like, well, a tea party. Moreover, had there been a grandfather clause in the law, it would have made it, in an obvious and undeniable way, economically untenable. The entire point of Obamacare is to dump the medical bills of the negligent and shiftless on those who are careful and hard-working. That cannot be done if they are allowed to retain their old health insurance plans.

The President’s latest gambit is also dishonest. He proposes by executive fiat to delay past the mid-term elections the implementation of the rules forcing insurers to cancel the plans previously in place. That this is unlawful is clear. The President is not Elizabeth I of England. He is not even James II. He does not possess and cannot even claim to possess what was once called “the suspending power.” That power, which the English monarch once did wield, was outlawed by the Bill of Rights in England in 1689, and no American President to date has ever possessed or claimed such a right. It is the constitutional duty of the President to enforce the law. He cannot pick and choose.

That is one problem. There is another. It takes insurance companies time to sort out what sort of plans they can afford to offer and at what prices. The President is now playing bait and switch with these companies. They were told—indeed, it is the law—that they must drop certain plans and offer others. They complied. They cannot simply gin up the old plans on the spur of the moment. The President and his minions no doubt know this. Their game will be to unload the public fury on the insurance companies—which, in supinely supporting Obamacare and in allowing the President to get away with his many lies—they in consideral measure deserve.

In the meantime, the congressional leadership of the Democratic Party has distanced itself from the President. Yesterday, when asked by a reporter whether they would echo the President’s non-apologetic pseudo-apology, they demurred:

House Minority Leader Nancy Pelosi (D-Calif.), who shepherded Obamacare through the House as speaker, said Obama was “very gracious” in making that apology but that the president’s words – in the context of the law – were “absolutely” precise.

She continued that she did not make a similar statement to her constituents, noting that she “would have if I ever met anybody that liked his or her plan, but that was not my experience.”

House Minority Whip Steny Hoyer (D-Md.) said at the time the statement was made, it was accurate. The problems with the messaging came when people interpreted Obama’s comments “expansively.”

“You understand that if you had a policy on the day that this bill was adopted, you got to keep it,” Hoyer said. “Now, you didn’t get to keep it if the insurance companies didn’t want to offer it to you.”

“When [consumers] become aware of what they did not have, I don’t think there’s anything to apologize for,” added South Carolina Rep. James Clyburn, the third-ranking House Democrat.

It is their hope apparently that the whole mess can be blamed on the insurance companies. As Joseph Goebbels is supposed to have said, “If you tell a lie big enough and keep repeating it, people will eventually come to believe it.”

There is one problem with this hypothesis, and Dr. Goebbels was apparently aware of it. “The lie,” he reportedly said,

This time I doubt that Pravda-on-the-Hudson and the other propaganda operations maintained by the Left can provide sufficient cover.

For this optimistic conclusion, I have two reasons. First, even if the President exercises with impunity a suspending power that he does not constitutionally possess—and even if the insurance companies scramble successfully to guarantee people a continuation of the insurance that they had—next year those plans will be cancelled, and everyone will know about it from the start. A stay of execution is not apt to reduce anxiety and anger. More often than not, it only increases the fear and the fury.

My other reason is simple. The Republicans can and, I believe, will pounce. Fred Upton has proposed a bill that makes good on the promise the President made unequivocally on 24 different occasions. It will guarantee that people can continue on their own plans—not just this year and next but thereafter. And, in doing so, it will drive a stake through the heart of Obamacare.

If all goes well, this bill will quickly clear the House [UPDATE: which it did, while I was composing this piece], and then the ball will be in Harry Reid’s court. The Democratic senators up for reelection will want to be able to vote for it. If it passes, Barack Obama will be between a rock and a hard place. If the Senate rejects it or he vetoes it [as he has now promised to do], the 2014 election will be a referendum on Obamacare. If he signs it, Obamacare will crash and burn.

So sit back, my friends; put your feet up; and pour yourself a tumbler of Scotch. Things are about to come unraveled as the prevarications of the Great Prevaricator catch up with the man and consume him as well as his allies. The counter-revolution that the Democrats successfully dodged in 2012 may still happen.