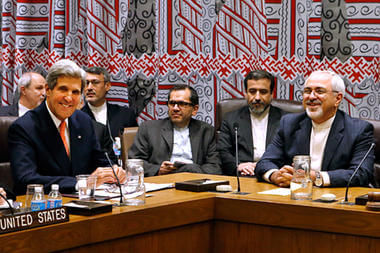 The short version of the interim deal just struck between the P5+1 countries and Iran is this: Iran gave away almost nothing, got a major financial payoff, and will retain its entire nuclear infrastructure. The US got a check mark on Obama’s legacy ledger, under the column Stuff I Did That Looks Reasonably Good If You’re Myopic Or Uninterested But In Fact Conceals a Seething Cauldron of Awful That Will Probably Not Affect Me Personally, Since I Will Be Out of Office When the Full Magnitude of This Failure Becomes Manifest.

The US also got a new entry in the ever-increasing list of Things John Kerry Has Accomplished, If That’s the Word, of Which He Is Unaccountably Proud.

Here’s a crib sheet on the details of the deal.

On the one side:

On the other side:

Omri Ceren of the Israel Project points out that President Obama’s goal for this six-month interim period was supposedly to prevent the Iranians from advancing their nuclear program. According to Orde Kittrie, a senior fellow at the Foundation for Defense of Democracies, this deal — which, if it were to have any teeth at all, would have had to “include stronger provisions relating to enrichment, Iran’s heavy water reactor at Arak, and Iran’s research into nuclear weapons design” — “falls far short of what the President set as the goal of this phase-one deal.” Iran will almost certainly be closer to a uranium bomb at the end of the six months, and according to Omri, they could be closer to a plutonium bomb.

– Iran reported won’t be forced to dismantle their centrifuges, such that at the end of six months they can just turn them back on. Even the conversion of 20% enriched uranium to oxide can be easily reconverted to uranium hexafluoride and enriched from there. The only way to put it beyond use is to actually irradiate the stock, but Iran doesn’t have the capacity to do that, even if the regime wanted to. Instead the stock will sit there waiting to be reconverted (link). Danielle Pletka, Vice President of Foreign and Defense Policy Studies at American Enterprise Institute, has assed that “every single step is reversible, every single step will have no meaningful impact on Iran’s capacity to produce a nuclear weapon within weeks or months” (link).U.S. concessions are irreversible – Most straightforwardly, Iran will get to pocket the financial relief they get, using it to stabilize the Iranian economy, bolster its nuclear program, and fund its global terror network. The more significant danger, however, is that chipping away at the sanctions regime completely shatters it. FDD executive director Mark Dubowitz was briefed a few weeks ago by the White House specifically on the question of whether U.S. concessions would be reversible, and he nonetheless assessed that the broad contours of proposed deals “totally eviscerates the sanctions regime” (link). There are multiple scenarios for how limited sanctions relief causes a downward spiral that irreversibly and substantially erodes the regime. The most immediate fear is that major powers and corporations will engage in a feeding frenzy: no one wants to be left behind as Iran’s market opens up, and so everyone tries to get in first. Brookings Institute fellow Michael Doran yesterday pointed to evidence that such a downward spiral was already beginning, with Paris looking to reopen a trade-related attaché office in Tehran next year (link).

Some Iranian concessions are irrelevant to the Phase 1 deal – For example, Iran will reportedly consent to a more aggressive inspection regime during the interim period. More inspections, however, are irrelevant to the central question of whether, six months from now, Iran is closer or farther from a nuclear weapon. With limited exceptions – scenarios for a test run “ruse” at Arak – analysts’ concerns are focused on what Iran will be in a position to do six months from now, not that it will cheat during the interim phase.

As to local response: Israel is disgusted that the Americans caved so completely and abysmally, and are making noises about rethinking the American-Israeli relationship. (They can’t, really, but there’s a growing chorus that wishes they could.) The Iranian mullahs, meanwhile, haven’t felt this beautiful since 1979, and are crowing that their “right” to enrich uranium has now formally been recognized.