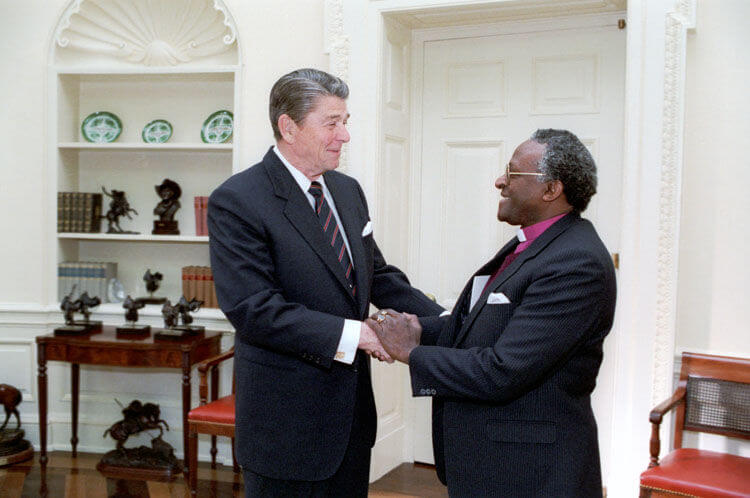 It started in the recent movie The Butler, in which President Reagan is portrayed as opposing sanctions against South Africa because–well, the movie leaves the audience to suppose he simply had a heart of stone–and now, in the coverage of the death of Nelson Mandela, Reagan is being mentioned—at least on NPR, to which I listened this morning—as if he were some kind of racist throwback.

A handful of facts:

1.  Reagan opposed apartheid and said so, often and publicly. From his 1986 speech on South Africa:

The root cause of South Africa’s disorder is apartheid, that rigid system of racial segregation wherein black people have been treated as third-class citizens in a nation they helped to build. America’s view of apartheid has been, and remains, clear: apartheid is morally wrong and politically unacceptable. The United States cannot maintain cordial relations with a government whose power rests upon the denial of rights to a majority of its people, based on race.

If South Africa wishes to belong to the family of Western nations, an end to apartheid is a precondition.

2.  Far from playing cozy with the Afrikaans government, as, for example, Bill Keller of the New York Times seemed to suggest on NPR this morning, Reagan himself imposed sanctions against the South African government, issuing an executive order that curtailed military and official relations between the U.S. and Pretoria. I repeat: Reagan himself imposed sanctions against South Africa.

3.  Did Reagan oppose economic sanctions against South Africa? He did indeed. Because he had a heart of stone? Nonsense. “The primary victims of an economic boycott of South Africa,” the President explained, “would be the very people we seek to help.” Again, from his 1986 speech on the matter:

Most of the workers who would lose jobs because of sanctions would be black workers. We do not believe the way to help the people of South Africa is to cripple the economy upon which they and their families depend for survival. Alan Paton, South Africa’s great writer, for years the conscience of his country, has declared himself emphatically: ”I am totally opposed to disinvestment,” he says. ”It is primarily for a moral reason. Those who will pay most grievously for disinvestment will be the black workers of South Africa. I take very seriously the teachings of the Gospels, in particular the parables about giving drink to the thirsty and the food to the hungry. I will not help to cause any such suffering to any black person.” Nor will we.

Looking at a map, southern Africa is a single economic unit tied together by rails and roads. Zaire and its southern mining region depends upon South Africa for three-fourths of her food and petroleum. More than half the electric power that drives the capital of Mozambique comes from South Africa. Over one-third of the exports from Zambia and 65 percent of the exports of Zimbabwe leave the [continent through South Africa.  Mines in South Africa employ] 13,000 workers from Swaziland, 19,000 from Botswana, 50,000 from Mozambique and 110,000 from the tiny landlocked country of Lesotho. Shut down these productive mines with sanctions and you have forced black mine workers out of their jobs and forced their families back in their home countries into destitution….

Reasonable people can certainly differ about Reagan’s assertion that economic sanctions would do more harm than good. What is clear—what is a matter of public record so obvious that only the mainstream media could ignore it—is that his motives were high. Reagan had an argument.  A humane one.