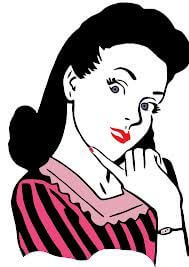 I was having a discussion with some friends (guys) last night, and the following question came up:

Is there any plausible way to buy perfume for a woman?  One of my friends said he didn’t especially like the perfume of a woman he was dating, not because it was bad, but because it actually reminded him of a cologne he wore in the past!

I’m sure you can figure out the other variants of this question:

Trivial? Forsooth! Any inquiry into the proprieties of buying women perfume strikes me as both eminently serious and strongly to be encouraged.

I wouldn’t worry too much about offending the lady in question by suggesting that her perfume needs to be replaced. She is putting on perfume to be attractive to her man, and if the current formula isn’t working, she’ll almost certainly want to change it up. Frankly, I think most women would rather smell like gorgonzola than wear perfume that reminds their man of somebody else.

Unless your friend’s girlfriend likes her perfume more than she likes your friend (which, if true, is something your friend might as well learn now), she will almost certainly be open to the suggestion that she change it to please him. There is a mild implicit criticism, of course — that her taste was somehow lacking — but there is an easy way to smooth over that problem.

Take her perfume shopping. I can just about guarantee that this offer will enchant the girlfriend. I know I tend to respond extremely well to proposals that involve shopping with someone whose company I enjoy for things that will make me feel pretty and hot. The odds are good that the woman in question shares my view. If your friend happens to like a particular perfume, he can steer her towards it at the store and make it clear to her how much he likes it. That kind of testimonial goes a long way on items like this. (And if she hates it, he’ll save the expense of buying her perfume she’ll never wear.)

Unless the decision is made right off the bat (i.e., if the woman is guided toward the man’s preference and accepts it straightaway), perfume shopping will entail lots of shpritzing onto the woman’s wrists, backs of hands, and forearms (as well as onto little cards, which is what they actually want you to use for testing at the store). Those wrists and arms will then be waved repeatedly under the nose of the man so he can venture an opinion. (Yes, his nose will get confused, but he needn’t fret. It won’t seize up completely.) This little dance can be both goofy-fun and sexy-fun, provided both parties approach it in a similar frame of mind.

My only caveat is that your friend should brace himself for a shock when he hands over his credit card. Perfume is expensive. But consider it an investment in the relationship. After all, from that day on, that bottle of perfume will represent that particular man in the girlfriend’s eyes. And the man will no longer have to tolerate being vaguely repelled by his woman’s scent — indeed, he’ll probably love it.

Got a question for Penelope? Write to AskPenelope@ricochet.com.

Disclaimer: The advice offered in this column is intended for informational and entertainment purposes only. It is not intended to replace or substitute for any professional, financial, medical, legal, or other professional advice. If you have specific concerns or a situation in which you require professional, psychological or medical help, you should consult with an appropriately trained and qualified specialist. Neither Ricochet nor the writer of this column accepts any liability for the outcome or results of following the advice in this column. Ricochet reserves the right to edit letters for length and clarity.