“It is just as cowardly to judge an absent person as it is wicked to strike a defenseless one. Only the ignorant and narrow-minded gossip, for they speak of persons instead of things.” — Lawrence G. Lovasik 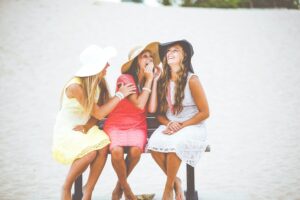 Father Lovasik didn’t mince words. He made it clear that gossip is a hateful activity, and those who indulged in it were to be held in contempt.

And yet is there anyone who doesn’t gossip?

In many ways, gossip is difficult to avoid. How can we talk about our lives without talking about others? For many of us, our interactions with others fill a large part of our lives—at home, at work, and in our recreation. But it’s worth looking at how we engage in gossip, not only what we say about a person, but the motives behind our behavior.

For one, I think we often gossip about others because we don’t like them, or what they say, or what they support. When you hold someone in disdain, it’s easy to find fault with him. We also experience a certain gratification when we discount someone else, because it puts us in the position of elevating ourselves. We would never say something like that. We couldn’t imagine ourselves expressing ideas like those ideas. So we deride people, and in the act, we demonstrate our superiority.

Rabbinic law distinguishes between various categories of talebearing (rekhilut), slandering, scandalmongering etc. Every kind of trafficking in evil report or rumors—whether true or not—by carrying them from one person to another, or by relating unpleasant or harmful facts about another, is forbidden. The rabbis forbade even “the dust of lashon hara” [avak lashon hara], i.e., lashon hara by insinuation, as in saying ‘do not mention so-and-so for I do not wish to tell in what he was involved,’ or in praising a person to his enemy since this also invites lashon hara.

But if gossip is so easy to indulge in, how do we stop doing it? I’ve found it very difficult to restrain myself, especially when someone angers or frustrates me; I think subconsciously I rationalize that they deserve my criticism, and therefore they give me the “right” to tell others about them. The person may be a person worthy of disapproval, but have they given me the right to gossip about them, or damage their reputation?

At times, I also feel the desire to “vent” my exasperation about people. It reduces my stress and anger, and I’ll usually feel better about the situation.

At least for a while.

I’ve thought about the subject of gossip for a long time. In Judaism, destroying a person’s reputation is a sin. I’ve discovered that it seems impossible to completely avoid gossiping. I’ve resolved as much as possible to limit how much and often I gossip about others. When I’m in a conversation where someone else gossips, I usually try to dissuade them from pursuing that line of discussion or change the topic. But at the very least, I try to refrain from gossiping myself. It only puts more ugliness in the world.

And what about Ricochet? Do our posts about people reflect our approval of gossip?