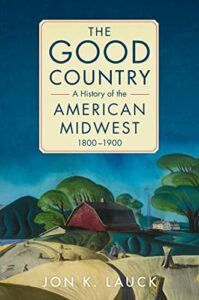 If you want historical facts to argue that America was not founded on systemic racism, that it was intended to be a force for good in the world, I want you to get this book. And, of course, I’ll give you a review copy of the audiobook. Just PM me.

The Good Country is the story of the Midwest, arguably the first egalitarian society on the planet. When the Founders were in Philadelphia creating the Constitution, the Continental Congress was in New York, writing the Northwest Ordinance, the law under which the Midwest would be settled. It specifically outlawed slavery in the entire territory. It set up homesteading in a way that discouraged land speculation and encouraged yeoman farmers.

As a result, the Midwest in the 1800s had no dominant political or economic class; it was mostly a society of smallholders the way Jefferson envisioned. The Midwesterners created societies, lodges, the Grange, and other egalitarian institutions intended to improve themselves and manage their politics. They built academies, colleges, and universities; over 90% of the population of Ohio was literate before it even became a state. There was plenty that was wrong with it; the book is The Good Country, not The Perfect Country. But it was as close as we’ve ever come to the Founders’ vision of a country where all are equal before the law and in opportunity.

This book is full of solid history to refute the idea that America is inherently racist and exploitative. There is much here to stir your pride in your country, whether you are a Midwesterner or not. Learning about it, I hope, will encourage those of us who love our country to try to bring back what was right about it and has been lost. This is my 71st audiobook narration, and I have never felt as passionate about a book as this one. Please, if you are even faintly interested, let me give you a review copy and give it a listen. Learning the truth is how we get our country back.