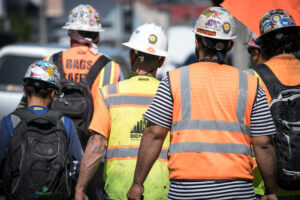 Recently, American unions have pushed hard to increase their power in the employment market. Unions may strike and thereby shut down a reluctant firm to extract a favorable deal, and will often do so even though that strike action imposes economic losses on union members. But just how hard will unions press to get a strongly pro-union labor contract? Last week in Glacier Northwest v. International Brotherhood of Teamsters, the US Supreme Court heard oral argument on a case that will help answer that question.

In Glacier, the union and the employer were locked in protracted negotiations over a new contract. The company uses cement mixers to distribute its ready-mix product to its customers. Just as the contract was about to expire, union drivers, as part of a coordinated effort, took their loaded trucks on the road, only to return the trucks, still loaded, to the company headquarters moments after the contract expired. The drivers left the engines running to prevent the immediate hardening of their cargo. However, owing to the large number of nearly simultaneous truck returns, much of that cargo did harden, inflicting immediate property damage on the trucks. The two sides reached agreement on a new contract a week later, but the dispute over these losses lingered on. The parties disagree over whether the actions of these workers came within the protected strike practices under the National Labor Relations Act (NLRA). Employers must bear losses caused by strike practices that the NLRA protects, but employers may sue unions in state court in tort for deliberate physical injuries.

This distinction makes a substantial difference. State courts hear and decide cases far faster than the National Labor Relations Board does. More important, state courts can award substantial monetary damages against unions while the NLRB cannot. Given these institutional differences, the key cat-and-mouse game is whether the case goes first to the state court or to the NLRB. The traditional practice on sequencing the two proceedings was set out in the important 1959 labor case, San Diego Building Trades Council v. Garmon, which held that the plaintiff may bring a tort action right away, to which the defendant might plead that the case was “arguably” subject to the provisions of the NLRB as a defense. Upon the defendant pleading such a defense, the tort suit had to be discontinued. The Supreme Court in Garmon ruled that the NLRA required a state court to dismiss a tort suit alleging that a union wrongfully attempted to win a contract by picketing an employer’s place of business. Indeed, that lawsuit was blocked even though the NLRB declined jurisdiction over the case, and even though the state court wanted only to award damages rather than impose an injunction against the union. The coercive effect of damages could induce abandoning the very behavior that the injunction would have directly prohibited. The question in Glacier was whether this employer was caught by Garmon pre-emption.

The answer to that question turned on a part of Garmon that crafted a large exception to the basic pre-emption doctrine when the court sought to supply a civil remedy for conduct touching interests “deeply rooted in local feeling and responsibility.” Courts commonly construed that Delphic phrase to provide protection against “tortious conduct” during a labor dispute. When reviewing the employer’s tort suit, the Washington state Supreme Court held that this exception did not apply “because [the] loss was incidental to a strike arguably protected by federal law.” The Washington Supreme Court also thought the case could be regarded as “economic harm [that] may be inflicted through a strike as a legitimate bargaining tactic.” The Washington Court of Appeals had thought that the case was clearly one that involved “vandalism or violence” and was thus “categorically unprotected.” At this point, the dispute in the Washington state courts turned into a semantic dissection of the law of torts that divided the liberal from the conservative judges.

Leading off the oral argument in the US Supreme Court, Justice Sotomayor insisted that the Garmon exception could not apply:

Sotomayor makes an elementary mistake with this description. The unionized employees knew that their choice to simultaneously return all of the cement-mixing trucks would likely overwhelm their employer’s ability to unload the trucks as they returned, which the unionized employees knew would cause damage to the trucks and render their cargo valueless. At this point, the inquiry is whether the prior actions of the workers could be linked to their decision to do nothing to protect the trucks and cargo after they were returned to headquarters. To this question the traditional answer was, contrary to Sotomayor, that the law would traditionally hold that the employees, and by implication their union, could not wash their hands of the damages.

The tort law generally holds that no person has a duty to rescue a stranger, no matter how dire his condition and how easy the rescue turns out to be. That rule has been attacked many times for allowing callous indifference to result in serious losses. Nonetheless, the rule survives in large measure because easy rescues are usually done without compulsion, so horror stories only rarely arise.

Like all legal rules, however, the no-duty-to-rescue rule is subject to a key exception:

Restatement (Third) of Torts: Physical & Emotional Harm §39 – duty based on prior conduct creating a risk of physical harm

When an actor’s prior conduct, even though not tortious, creates a continuing risk of physical harm of a type characteristic of the conduct, the actor has a duty to exercise reasonable care to prevent or minimize harm.

That rule thus would apply even if the drivers had initially forgotten to keep the cement mixers rolling. The duty to correct the situation is even stronger when the workers knowingly chose to keep the cement mixers in operation, certain that the employer could not completely neutralize the risk. Indeed, the rule could hardly be otherwise. Suppose that the workers had left time bombs in the trucks set to go off an hour after they returned. These employees could not escape responsibility for the harm caused on the ground that the NLRB was the place to deal with personal injuries and property damage.  The intentional element in this case makes a big difference, as it does in all physical injury cases, because among other things it prevents the workers from saying that the employer failed to mitigate the risk.

One reason why Glacier presented so much confusion at oral argument was that the standard formulation of Garmon exception was couched in terms of the union’s “failure to take reasonable precautions to preserve property.” That definition surely applies to cases where the union workers are in the best position to prevent harms caused by either natural events or third parties. While that argument could prove vulnerable to Sotomayor’s no-duty objection, her objection has no application when a party’s destruction of property is caught under Restatement Section 39.

That distinction has to be correct, for the losses from the deliberate destruction of property here are not what the common law has, following the Roman law, called damnum absque iniuria, or harm without any form of legal injury. That Latin phrase in ordinary discourse applies to cases where a defendant has inflicted competitive losses on the plaintiff by selling superior goods at a lower price or has blocked the plaintiff’s views of the waterfront by building his own house between the defendant’s house and the beach.

In these cases, the alleged private harm is inversely related to the social benefit, which is why the common law ignores the private losses in those two situations (even if statutory law regrettably alters the situation). Competition (but not monopoly) creates efficient markets in products and services; forcing successful market participants to compensate their defeated rivals would destroy the market. Similarly, real estate construction would come to a halt if my new house prevented you from building on your own land because it blocked my views. People who want to preserve views have to pay for them, which they routinely do when the single developer of a planned development aligns his units only after taking views into account in ways that maximize overall wealth to all parties, views included.

I have strongly opposed modern labor law in part because the employees’ collective refusal to deal violates the antitrust laws per se. Section 6 of the 1914 Clayton Act first excused this, and then the NLRA affirmatively promoted such actions. To take the exceptional protections for union activities one step further, by allowing Garmon pre-emption to cover willful property destruction, would be the height of folly. From the oral argument, it looks as if the three liberal justices will lose out to their conservative colleagues. A ruling in favor of the employer would correct the deeply flawed decision of the Washington Supreme Court.

© 2023 by the Board of Trustees of Leland Stanford Junior University.