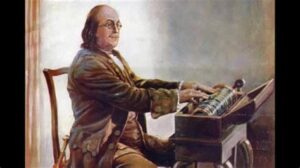 In Paris, a friend took him to a concert where a musician played on a tray of wine glasses that had been filled to different levels. Franklin figured out how to do it better, and invented the glass armonica, which he said was his favorite invention. Mozart, Beethoven, and Tchaikovsky wrote pieces for it; “The Dance of the Sugar Plum Fairies” in Swan Lake was originally scored for glass armonica. Its popularity waned because the ethereal sound it produced was supposed to have driven a couple of the musicians who played it mad.

There was a laboratory glassware company in New England that would make you one out of quartz bowls, which are a lot less fragile; not sure if they are still in business. There are lots of YouTube videos of folks playing pieces on the armonica; I like William Zeitler, who used to do concerts at Colonial Williamsburg.

As I often say, never underestimate an old, fat guy.