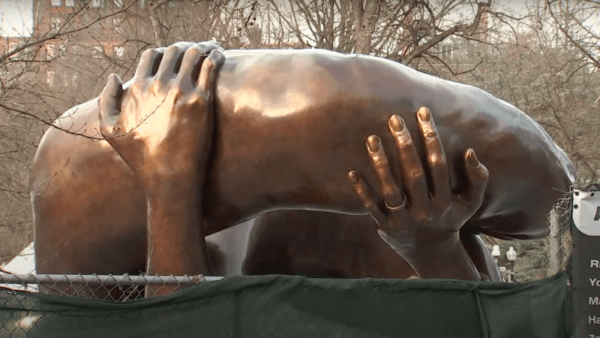 The new sculpture unveiled in Boston Commons to honor Martin Luther King Jr. Day is drawing comments, controversy, and well … creative observations. For example, as I viewed the new sculpture from a safe vantage point in Florida, I had to complete my Cologuard requirements and get them shipped off today, holiday aside. The box said don’t delay shipping it back, even if it’s a weekend or holiday, so I didn’t delay.

This is an important step when getting older, to keep up preventative maintenance, which includes shipping off something that I thought (cough) resembles the new sculpture. I’m sorry. I see the arms — I don’t see the rest of the message in the right light. Maybe another day it’ll look different?

I showed the image to my husband, who’s Southern. “It looks like a giant sweet potato. What the hell is it supposed to be? What’s for dinner?” So much for art.

Then I came across another story on this momentous unveiling. They were less than generous in their view of this new, very large piece held up by two arms.  Here is the story … and they need to go to confession. Sheesh!

We studied the great liberator MLK, Jr., in school. We had to memorize a speech he gave. You know it: the famous “I Have a Dream” speech. My cousin marched in DC with him. He changed a nation and a culture, and led a movement in peace. He should be honored with a decent statue and, most of all, his words written on a plaque. He should be taught to the Woke generation because his words ring hollow to them today, in my opinion.

He never raised a hand in violence or advocated for the abolishment of law and order. Martin Luther King, Jr., was a great man who deserves a better sculpture. He supported equality for all, and I hope most of all, that is remembered on his holiday.