There have been any number of analyses predicting the real-world fallout from such a decision, ranging from the philosophical let-the-chips-fall-where-they-may to the apocalyptic (there will be No Black Students At Harvard!)

What I haven’t seen predicted is the outcome I believe to be most likely: Black students, and black families, will simply up their game.

Following the Dobbs decision, returning the abortion question to the states,  Twitter was suddenly filled with the Tweets of outraged feminists declaring their utter and complete unwillingness to hook up with random men until Roe v. Wade was restored.

Now that the Handmaid’s Tale was coming true, parents Twittered that they were holding family meetings with teen and tween daughters about the need to exercise extreme choosiness re: sexual partners, and encouraging their kids to take a belts-and-braces approach to contraception.

In such communications, these Americans were ironically confirming a pro-life point. Legalized abortion had, indeed, created a culture of sexual license and irresponsibility, one in which women did hook up with random men and parents did not feel obligated to stress self-protection and self-control when discussing sexuality with their offspring.

But the tweetsters also demonstrated a more universal fact about human beings: Alter the incentives, and people will tend to alter their behavior. If abortion becomes less available or acceptable, women and girls will not be left helpless in the face of natural urges (their own or those of their “partners”). They can and shall make different decisions, and assert more control over their own bodies and the uses made thereof. Where abortion is not available as a fallback, parents who care about their children’s futures will work harder to protect daughters and sons from their own immaturity by, among other measures, imparting very different messages about acceptable sexual behavior. The result could easily turn out to be largely positive—fewer unplanned pregnancies, lower rates of sexually transmitted diseases, and the end of what has been termed “hook-up” dating culture, one that frankly does not serve women well.

At the moment, I believe it is fair to say that the stated goal of affirmative action advocates—equality of academic outcome— has not been achieved. Affirmative action was already operating when I went to college some forty years ago. A kid admitted to Harvard today on the strength of a good application given extra weight because of his black skin is probably the offspring of parents whose own applications to college were similarly weighted. The original assumption was surely that affirmative action would simply become unnecessary, as racism dwindled away and well-educated, middle or upper-middle class black professionals raised bright, educated, ambitious offspring. By now, surely, a purely colorblind, merit-based Harvard application process ought to have been able to generate all the skin color diversity needed to soothe the most anxiously anti-racist Harvard dean?

The problem—Harvard’s problem— is revealed in the following charts: 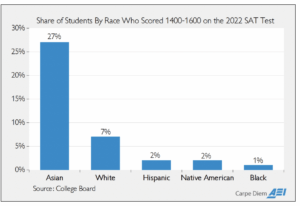 I would note, here, that the point of the SAT test back when it was first created and administered was to reduce the influence of bias on college admissions. The idea was that the test would provide an objective measure of academic qualification that a prejudiced admissions official would not be able to overlook.

Why—particularly in a “white supremacist” society— are Asian students so wildly over-represented among the top scorers? Why are African American students under-represented?

The racist would say, “because black students are defective by nature.”

The anti-racist would say, “because black students have been rendered defective by centuries of white and white-adjacent anti-black racism.”

Both would agree that the defect is essentially permanent.

Let’s assume, for the sake of argument, that no one now reading these words is a racist.

And let’s assume, also, that everyone reading these words prefers the reality of academic achievement to the mere appearance thereof.

The SAT is a concrete, measurable marker of academic achievement as well as of academic potential. In other words, doing well on the SAT means, among other things, that a student has not only the talent, but the basic skill set required to thrive at college. Math skills and reading comprehension, yes, but also self-discipline, the ability to delay gratification, attention to detail, and a willingness to persist through the hard and boring parts of mastering a subject. It is not a test merely of natural aptitude or talent, but of these gifts combined with a capacity for plain old hard work.

Remember, here, that not all students take the SAT. Only kids who plan to apply to college take that test, so these are the scores of relatively bright children, the offspring almost by definition of parents who are relatively strongly committed to their child’s education.

Such individual and familial attributes do not function in a vacuum. Of course, it is difficult to achieve academically when one is immersed in a subculture that disdains academic achievement, and a lot easier to immerse oneself in studying when your subculture expects it and your peers are doing the same. But students and parents necessarily take their cues from the messages received from the wider educational environment.

“How hard do I need to work in order to be given an A?”

“How many A’s will my report card need to show in order to be admitted to the college of my choice?”

I have one kid (a stepson, so it’s not bragging) who was an extraordinary and ambitious academic achiever. In his freshman college dorm room, pinned to the wall above his desk, was a list of the best law schools in the country, and the LSAT scores and grades required to get into them. Want to know how hard my stepson worked as an undergrad?

As hard as he needed to. Which was incredibly freakin’ hard. (And yes, he got into all the best law schools.)

This study, published by the National Center for Education Statistics, provides a glimpse into why SAT scores might differ by race. It compares the sheer number of study hours put in by students (and checked by parents).

As it happens, my stepson is white and male. His parents, teachers, school counselors, the authors of the SAT prep books (and, later, LSAT prep books)  he worked his way through: Every source of feedback throughout his primary and secondary schooling offered the same message: “This is what you must do to get what you want.”

My Asian-American friends confirm that the anti-Asian bias in academia has been well-known for decades, and is accounted for by both students and parents when calibrating the level of effort required to achieve the desired end. The sources of feedback tell them, over and over, “This is the bar you have to clear.” So…they clear it.

Why aren’t black students (on average) studying as hard, or long? Why aren’t their parents pushing them to do so?

Perhaps the answer is exactly the same: Every source of feedback throughout their primary and secondary schooling are telling them: “This is how much you (or your child) must study in order to get what you want. This is the bar you have to clear.” So they clear that bar. If the bar was set higher, they would clear that one too. But the bar isn’t set higher. It’s set lower.

A Harvard dean of admissions, William Fitzsimmons, testifying before the Supreme Court, told the court that Harvard sends recruitment letters to African-American, Native American, and Hispanic high schoolers with mid-range SAT scores, around 1100 on math and verbal combined out of a possible 1600, CNN reported.

Asian-Americans only receive a recruitment letter if they score at least 250 points higher — 1350 for women, and 1380 for men.

As it happens, my stepson is white and a bright young man. But it bears repeating that brightness isn’t enough: Hard work is what makes the difference. And the self-discipline and capacity for delayed gratification he exhibited were skills learned and practiced over many years.

It is essentially the same self-discipline exerted by a successful serious athlete. She forces herself out of bed at five every morning to put in three hours at the gym before school starts. She reduces social commitments to make time for team practices and tournaments. She learns to meet failure with renewed determination, rather than resignation.

If such an athlete belongs to a family that prizes athletic achievement, and to a subculture that rewards it, naturally the effort will require less of her own willpower. The “choice architecture” provided by her culture will make excellence not easy—it’s never easy—but easier.

What if that athlete (and her parents) get the message that an hour at the gym before school is plenty? Or that she can skip practice, or come in second or third at the meet, and still get all the acclaim and gold medals?

We are not talking, here, about someone who is “naturally lazy.” But no rational human being is going to work harder than she must in order to achieve what she desires.

Set the bar high—even unfairly high—and she will work harder in order to clear it.

I believe it is entirely possible that the answer to the perplexing question of why even bright, ambitious, middle-class black students (on average) underachieve and Asian and white students (like my stepson) over-achieve is simple. Affirmative action.

Affirmative action has altered the choice architecture within which students of all races and their parents make their individual and familial decisions.

Study or watch TV? Be content with a B+ or push for that A? Spend four hours grinding through yet another practice SAT, or go skiing with the family? Spend money on tutors, or spend money on a new car?

These aren’t easy choices to make—we’re talking about sacrifices most of us would find at least a bit painful. Asian families don’t push their kids to study more diligently because such parents get their jollies from exerting discipline, but because they’ve gotten the message transmitted by everybody, from Dean Fitzsimmons down to little Tong’s first-grade teacher: Want your kid to have the best chance in life? This is the bar your kid has to clear.

If and when the choice architecture gets altered (for instance, should SCOTUS end affirmative action), the short-term effect will certainly be a reduction in the number of blacks and an increase in Asians at Harvard.

But in the long run, I strongly suspect that we will see an increase in the academic achievement of bright black children of black parents who are strongly committed to their child’s education.

Since I do not believe that black people are damaged or defective, it wouldn’t surprise me if, within a decade or two, the percentage of black students scoring in the upper 1300s or higher on the SAT will have increased markedly, with concomitant improvements all the way down the scale.

I predict that black drop-out rates (another statistic Harvard, et al., would prefer we ignore) will decline, starting almost immediately, as fewer students will be admitted to college programs they have not (yet) developed the skills to manage.

In other words, the big winners from the end of Affirmative Action will be…black students. Well, the biggest winner of all will, of course, be all of us. We all benefit when young Americans, of any race, fully develop their intellectual gifts and capabilities.