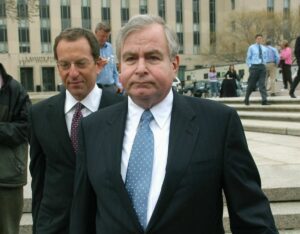 After the discovery of two tranches of classified documents in different locations belonging to President Biden, a third batch of such documents has been found stuffed down the pants of former National Security Advisor Sandy Berger.

Berger, former president Clinton’s National Security Advisor, was convicted in 2005 for removing classified documents from the National Archives by stuffing them down his pants. Berger subsequently lied to investigators when questioned about the removal of the documents but served no jail time for either crime because Washington deemed him kind of a big deal.

President George W. Bush’s Attorney General Alberto Gonzales saw Berger for what he was – a fellow swamp creature – and so the Justice Department initially said Berger only stole copies of classified documents and not originals. It took the House Government Reform Committee to reveal that an unsupervised Berger had been given access to classified files of original, uncopied, and uninventoried documents on terrorism. Nancy Kegan Smith – who was the director of the presidential documents staff at the National Archives at the time – acknowledged that she had granted Berger access to the original materials in her office.

With his trademark passion, wisdom and good humor,he is remembered fondly within the ranks of the national Security Council, where those he mentored carry on his work.