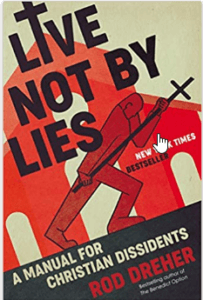 I bought Dreher’s book Live Not by Lies:  A Manual for Christian Dissidents to look for suggestions and ammo for fighting the culture wars but instead, I got a survivor manual for a war already lost. The first half of the book is about how bad it is out there and why it will likely get worse in large part because the west is rapidly adopting the Chinese social credit system. The right to have a bank account, to make purchases, or even to be employed are becoming contingent on a continued demonstration of right thinking and behavior. Being denied a social media presence is a slap on the wrist compared to being banned from commerce by all large corporations for being explicit enemies of the state (gun manufacturers and sellers, right-to-life groups, the fossil fuel industry, orthodox religious groups, etc.). Or just living under the constant threat of being called out, detected, and fired in some woke purge. In China, your ‘credit rating’ drops if your family and friends are not compliant. The scope and detail of the state leverage are frightening.

When reading the book, I recalled the outstanding German movie Lives of Others (2006) about the personal moral struggles of a Stasi secret policeman. In one scene, he and his team have just planted listening bugs in the apartment of the targeted figure. A neighbor peeks out at them as they departed the scene and the lead agent calmly warns her that if she says anything, her daughter (he knows and recites her name!) will not be admitted to university. It was less about the specifics of the threat than the terrifying realization that they know all about you. The Stasi relied on paper files and boxes of index cards. It is unimaginable how thorough they could have been with control over Alexa, Siri, and smart appliances, all run by a constantly learning AI on supercomputing platforms. Is that in our future?

Dreher quotes people who had lived under communist rule who are appalled at how passively Americans accept woke tyranny, social media manipulation, and “soft” social sanctions to compel silence and conformity in the face of obvious lies about human nature or history.

I was thus primed and ready for the second part of the book. How do we fend off this monstrous attack on freedom? The answer? Strengthen faith, learn from the example of Christian martyrs, prepare to endure suffering, strengthen the family and small groups, and expect the ultimate victory of the truth purchased, as ever, by the blood of martyrs.

Not really the answer I was hoping for, Rod.

I am more in tune with the character Thomas More wished to be in A Man for All Seasons “Whatever may be done by smiling, you may rely on me to do…. This is not the stuff of which martyrs are made.” I would rather remain in a comfortable mild cynicism (with ready access to second breakfast) without the demands of some great struggle, thank you. If really necessary, I would prefer the role of the reluctant hero, like Rick Blaine, Oskar Schindler, or Bilbo Baggins, and definitely not that of the martyrs and spiritual heroes of the death camps and gulags.

What is especially tiresome about the new totalitarians is that (a) they lack the radiant optimism of the suckers who first foisted communism on the world–the woke are not the type to die for the cause and (b) they are too ignorant of even very recent history to see that the inevitable end of a war against objective truth, morality and human nature is some form of Götterdämmerung preceded by the execution of numerous Nikolai Rubashovs as the ‘revolution’ necessarily devours its own.  Yes, cupcake, no matter how woke you are, there is a wall and some bullets waiting for you too.  People who waved red flags or wore swastika armbands in 1939 could perhaps delude themselves about where it would lead. Nobody in 2023 has that excuse.

The core of the resistance to the rule of Soviet puppet regimes may have been spiritual but the appetite for a materially better life also helped drive many young people in the communist world to resent and rebel. But what if the new totalitarians start with a wealthy society (which they will cause to decline) and threaten to take away access to that (shrinking) supply of wealth? A scary thought is that consumer capitalism and the concomitant false notion that freedom is solely an entitlement to self-indulgence have gutted our capacity to fight and endure a moral struggle for actual freedom. Meditate on that and welcome to Mr. Dreher’s world.

I recently had a chat with some young, conventionally lefty acquaintances. One opined that when the Second Amendment was adopted, gun hobbyists/collectors did not have access to automatic weapons (I no longer waste time explaining the definition of “semi-automatic). I explained that the Bill of Rights was mostly about the right to fulfill obligations of conscience to speak and live the truth as one’s conscience sees fit and to respect and protect the rights of others trying to do the same. Owning a gun was about the right to discharge an obligation to protect family, property, and community. If we don’t see the Bill of Rights in terms of requiring government respect for a conscience-driven life, then we don’t understand it. That drew blank stares. I don’t think my young friends are ready for a life in The Resistance. We have such a warped idea of freedom that it will be hard to want to fight for it.

I fervently hope that this cup shall pass and that we don’t need widespread martyrdom to get us past this era’s flirtation with the forces of evil and stupid. Maybe less dramatic, but more widespread moral heroism could be enough. As More observed from his prison in A Man for All Seasons:

If we lived in a state where virtue was profitable, common sense would make us saintly. But since we see that avarice, anger, pride, and stupidity commonly profit far beyond charity, modesty, justice, and thought, perhaps we must stand fast a little – even at the risk of being heroes.

Is it possible for us all to ‘stand fast a little’ more often to oppose the silly but deeply pernicious lies that some are trying to impose by fiat? Would that be enough?