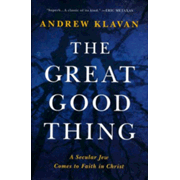 I enjoy listening to Andrew Klavan – when he had a daily podcast on Ricochet I listened almost every day. His reflections on Trump through the last few years have often mirrored my own, appreciating the many unexpectedly good policy decisions the man made, while being quite critical of the man’s character. Klavan is often insightful on matters of culture and faith, and I was encouraged by his memoir, The Great Good Thing: A Secular Jew Comes to Faith in Christ. He is also very, very funny.

But I have never cared for him as a fiction writer. I struggled all the way through his novel Empire of Lies. The characters never came alive to me; they were rather cardboard spokespeople for points about the mainstream media’s attacks on Christians and conservatives. I’ve tried to read a number of his other novels, but they’ve never captured me. (Including Werewolf Cop, and believe me, it takes a lot to make me put down a book about werewolves. The idea of crime-solving wolf man was done much better in Nicolas Pekearo’s The Wolfman.)

As far as his screenwork, I very much enjoyed A Shock to the System. It’s a clever, cynical thriller with Michael Caine, but it is based on someone else’s novel. I haven’t seen One Missed Call, but Klavan says that the screenplay was butchered by the director. I have seen True Crime, a Clint Eastwood film based on a Klavan novel, but I don’t think there are many Eastwood fans that would find a place for that film in Clint’s top twenty.

I tried to listen to Another Kingdom, but I found it hackneyed and derivative and couldn’t make it through more than a few episodes. At his best, I found Klavan’s fiction to be second-rate John Grisham. (Grisham also often inserts his politics – liberal – and Christian faith into his work.)

That is why I found it so very strange, and frankly annoying, when Klavan dismisses the novels of C. S. Lewis as “bad Christian fiction” as he did (again) in a recent podcast.

Believe me, I have suffered through plenty of Bad Christian Fiction. I just finished seven years of writing Movie Churches, a blog reviewing churches and clergy in films, and I watched plenty of bad, including all four God’s Not Dead films and the entire oeuvre of Alex Kendrick (Facing the Giants, Fireproof, War Room, Courageous, and on and on). In this kind of work, hard truths are often not addressed, happy endings are assured, and characters are either saints or mustache-twirling villains. As Klavan says, if people enjoy these films and novels, fine, but the movies and novels aren’t good art. 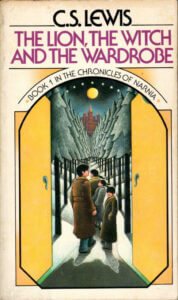 But I would argue that Klavan’s fiction shares many of these weaknesses, and C.S. Lewis’ does not. In the recent podcast, Klavan complains about that in The Chronicles of Narnia, “when the Lion appears, everything is going to be okay.”

That is just silly. Yes, the Lion, Aslan, is a stand-in for Jesus. But His appearance doesn’t immediately make everything right.

That’s like saying, “I was reading this book, Exodus, but once this ‘God’ character appeared and parted the Red Sea, I lost interest. If God can solve all the problems, why keep reading?”  If you stop at that point in the book, you miss the rather interesting plot point that after seeing the power of God, most of the Israelites still rebel against God and wander around the wilderness for many years.

As the more astute may have discerned from my Ricochet avatar (Eustace C. Scrubb), I have an affinity with Lewis’ Narnia books. We know the series was written for children, but Klavan seems to want to hold them to the standards of adult novels – which is fine, actually. I believe those seven novels stand well with any literature.

Not everything comes out swell in those tales, as things usually do in Bad Christian Fiction. For instance, let’s look at the Pevensie children, the major characters in The Lion, the Witch, and the Wardrobe. One of the children, Edmund, commits a grave act of treachery that only can be redeemed at a great cost. We learn in a later novel that Susan Pevensie loses interest in their magical world and falls away from faith. In the last novel, her eternal destiny is still in question.

And yes, there is resurrection in that first novel and Klavan seems to believe it away all dramatic tension. In this case, it’s like reading the Gospel of John and saying, “After reading about the resurrection of Lazarus, I quit. I mean, what were the stakes?”

The author of Miracles wouldn’t be true to his understanding of the world in his fiction if he didn’t include miracles. The author of Mere Christianity couldn’t write about a world without an incarnation. But these things don’t instantly make everything okay. After the resurrection in that first book, there is a deadly battle with consequences, pain, and death.

Lewis wrote many other works of fiction besides his children’s books.

Till We Have Faces, a retelling of the Greek myth of Cupid and Psyche, is as far from “Bad Christian Fiction” as one can go – with no easy answers and much sin, trouble, and pain.

The Screwtape Letters is as much a book of philosophy and theology as it is of fiction, but the demon Screwtape is almost certainly a richer and fuller character than Klavan seems able to dream of creating. 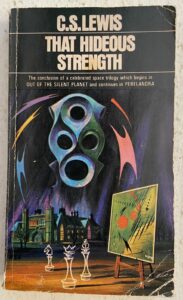 Then there is Lewis’ science fiction trilogy. The first book, Out of a Silent Planet, does a marvelous work of bringing the supernatural naturally into the world of science fiction. Perelandra does a wonderful work of reimagining creation without the fall. As for the third book, That Hideous Strength…

Perhaps no book better foretold the world we live in today. A world where the government, the press, and academia all work together to present a false reality to the populace in order to rule with their sinister motives.  Lewis even uses the acronym N.I.C.E. (National Institute of Coordinated Experiments) as a satiric spoof of government propaganda. Today, of course, Great Britain truly has N.I.C.E. (the National Institute for Health and Care Excellence.)

No less a writer than George Orwell wrote favorably about That Hideous Strength but was bothered by the supernatural intrusions to the story. But could Lewis be true to his worldview without including the supernatural in the story? I don’t think so.

C.S. Lewis was one of the greatest writers of the 20th century. He wrote great works of theology, literary criticism, philosophy, and memoir.

And he also was a great fiction writer, composing work with wit, insight, and passion.

But if you can’t appreciate his fiction, Mr. Klavan….that’s cool.