Here’s the much-discussed Hannity interview (at the bottom of the post) in which he verbally shoves and slaps Representative Lauren Boebert for not holding his own views.  In this interview, you can see her struggle to make some of the points much better presented in this friendly interview by Michael Knowles, which I covered here yesterday.  It’s a fascinating contrast, as we generally appreciate journalists who do not let people get away with weaselly answers, and we admit that Knowles’ interview is “on-side,” that is, designed to let her get her point across.  Yet, Hannity’s appalling display of answer-the-question-ism is not a strong journalistic refusal to take no-but-yes for an answer — it is predicated on weaselly questions.  It’s dishonest and abusive.

Hannity frames the issue as if this were a contest between candidates in which one selects a favorite and votes one time.  This is not that.  This House Speaker election is a different sort of contest, composed of a series of votes as needed.  It’s not a one-and-done; there is no final answer until somebody wins.  Many who might run will not say so early on, particularly if a presumptive front-runner is still in play, and particularly if the potential candidates already have agreements in place with that front-runner.  This process is designed to put pressure on candidates to make concessions — this way, any view that gains sufficient traction is also represented.  It is designed to help prevent domination by a 26.5% cabal.

Word is getting out that the Hannity interview was so over the top, so jump-the-shark, that it’s blowing up in his face.  Good.  Here’s how the YouTube auto-complete estimates the rest of the phrase “Hannity…”: 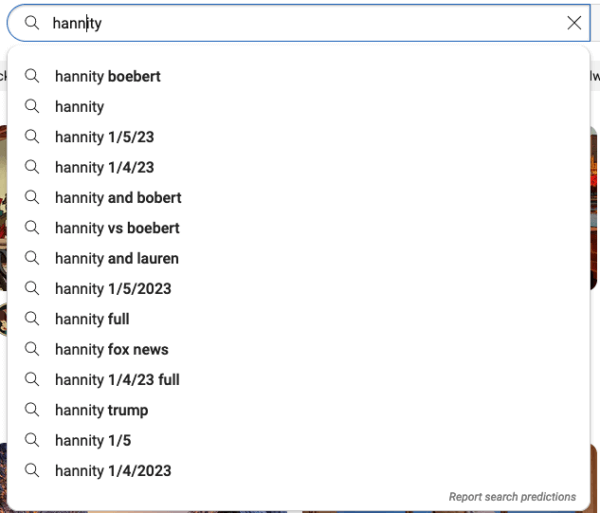 “Who’s your final pick, huh? Huh? Huh?” is just badgering, and for a tactical reason — Hannity’s job here is two-fold: to make it look like she has no answers, and to prevent her from getting her points across.  “Final answer now now now” is not how this works at all, and Hannity knows this.  It’s not a question — it’s a talking point, and the same one we’re being soaked with from media in every direction.  Well, nobody has answers to stupid questions that miss the point, and we saw in the Knowles interview that she actually has a lot of great points.  That Knowles interview has been converting people to the House Freedom Caucus (HFC, Boebert’s side) in droves, because their points are valid.

Fox News is an utter loss to the conservative fight, and may now safely be counted among the propaganda arms of the Deep State.  I’m leery of the area close to “controlled opposition,” but Fox is ticking all the right boxes.

Please do watch the Hannity hatchet job, and as you do so, ask yourself, “Why is he so angry?  Why does he push so hard for an answer that he knows can not be given?  If he were trying to shut her up while making her look stupid, what would he do differently?”

I linked to the Fox channel post of the video because I don’t want the link to die.  I want people to see this video.

Finally, this b-roll for a show trial, in contrast to the Knowles interview, shows why it has been so important for the HFC 20 to make such a stink. By holding out, they have brought enormous attention to McCarthy’s dirty anti-Representative and anti-conservative dealings, the media’s typical dumbed-down misrepresentation and outright propaganda duty, as well as Fox News’ utter partisanship even in an internal fight among Republicans.  Fox is a wholly-owned subsidiary of McCain/McConnell/McCarthy, Inc.  (And it turns out that Hannity was behind Tucker dropping the Hunter story, but that’s another post).

If McCarthy finally makes concessions in exchange for sufficient HFC support, yay!  If he steps aside and somebody else gets grilled, yay!  We would have neither of these options if the HFC had not stood their ground.  Which is why this propaganda onslaught was designed to poison you against them.