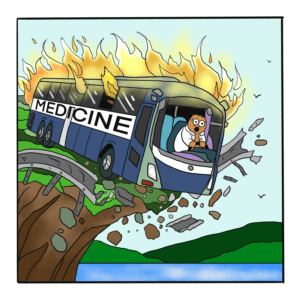 The behemoth that is modern corporate medicine tends to turn slowly. When the pivot eventually begins, it is a messy situation. Imagine a bus making a U-turn on a crowded street that it should never have gone down in the first place.

The turning is already beginning if you’re paying attention. Dr. Aseem Malhotra, a British cardiologist, has been very vocal about his opposition to the covid vaccines, in part due to the death of his father, which he blames on the shot. He is no stranger to controversy; his book titled A Statin Free Life probably cost him his invitation to the cool kid’s cardiologist club. Prior to his father’s passing and subsequent further investigation of the mRNA vaccines, he was a proponent of the products. More conversion stories like his are needed because one interesting thing about medicine is it can only correct itself. If The Lancet, for example, publishes a bunch of false data, then only the Lancet can set the record straight. Anyone outside of the Lancet that points out that same data is spreading misinformation.

In the states, Dr. Peter McCullough was also outspoken but consistent this whole time. An early advocate of hydroxychloroquine and ivermectin, his head was first on the chopping block. Baylor University Medical Center, where he had hung his hat since 2014, would disown him and go so far as to file suit against him to prevent him from claiming any association with the institution. Those are the actions of a teaching hospital in Texas, which illustrates the extent of institutional capture by this lunacy. His most recent published paper, a report on myocarditis adverse events, was initially approved for publication but quickly withdrawn by the publisher. Dr. McCullough has fought back with a lawsuit against the publisher Elsevier. He has accused them of censorship for the removal of the article. His co-author Jessica Rose, an immunologist and biochemist, has stated that the removal of the article is unheard of and in breach of contract.

American converts include Dr. Vinay Prasad, a physician from California whose greatest crime is advocating for a more open debate on both sides. Dr. Leana Wen, CNN’s medical analyst, perhaps most famous for her comments about barring the unvaccinated from polite society, just recently called for the removal of mandates. Dr. Drew of “Loveline” fame and still the host of a very popular YouTube show, has gone from defending Dr. Fauci to interviewing Dr. Ryan Cole, a forensic pathologist making waves by describing some very disturbing blood clots he believes are related to the covid vaccines. To his credit, Dr. Drew has been open about his own vaccinations and adverse events associated with them.

While some riders have jumped up and attempted to turn the bus before it goes over the cliff completely (maybe it already has), there are still numerous voices from the back telling them to sit down and shut up. Dr. Fauci clearly has no regrets, and his likely successor Dr. Peter Hotez continues to advocate for the covid vaccines across all age groups. Dr. Hotez even goes a little further, claiming that upwards of 40,000 unvaccinated Texans are dead due to anti-vax grifters (excellent band name). Dr. David Gorski, a surgical oncologist, describes Dr. Prasad as “at best, a useful idiot for antivax propagandists.” The idea that anyone questioning medicine has no place in medicine is still a popular point of view for many.

What we have here is a good, old-fashioned doctor fight; these are nothing new but, in the past, were less public and less consequential. The stakes are higher than ever before. It’s not like we are arguing over how aggressive statin therapy should be or which blood pressure medicine is most appropriate. Instead, each of these sides is accusing the other of outright harm by professional negligence to be as polite as possible. “Safe and effective” may be long gone but “safe enough to get away with” is still on the table. Things have gone off course before and, if history proves one thing, it takes time to resolve.

Oxycontin came to the market in December of 1995; almost a decade later Barry Meier, a journalist, began investigating Purdue Pharma and Oxycontin. In 2006, Purdue executives would pay $634 million in fines. Fast forward another decade, and by 2015, much more of their nefarious web of marketing including 20,000 educational pain programs was revealed. Big surprise, these organizations advocated and promoted more aggressive identification and treatment of pain pushing people towards their drugs. It was remarkably easy for them to saturate the conversation with their propaganda. It’s been 27 years and they are still settling lawsuits over that debacle.

There was a point when cigarettes were thought of as healthy and relaxing. You could argue that RJ Reynolds and their Medical Relations Division were pioneers when it came to controlling the medical establishment. The 1942 American Medical Association convention featured a smoking lounge for doctors to relax and socialize; by 1947, hundreds of doctors were lining up to receive a free pack of smokes. Much like today, suspiciously biased studies were conducted to make the case that Camels were the healthiest cigarette. One study claimed that Camels burned slower than other brands and thus exposed the smoker to less nicotine. Their most egregious marketing campaign would claim that all doctors preferred Camels, however, with the FTC beginning to crack down, they would change the wording from “all doctors” to “113,597 surveyed physicians.” The party would finally come to an end in 1964 with the Surgeon General’s report on smoking and health.