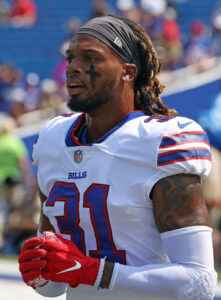 Like many people, I have been moved by the prayer and expressions of love and compassion regarding the tragic football incident involving Damar Hamlin:

After a routine tackle during Monday night’s Bills-Bengals game, Buffalo Bills safety Damar Hamlin collapsed on his back in cardiac arrest. Medical personnel administered CPR for roughly 10 minutes before an ambulance carted Hamlin off the field and to a Cincinnati hospital. While it drove off, onlookers reported seeing Bills head coach Sean McDermott gather his players on the field for communal prayer. As both teams and staff knelt around Hamlin during those 10 minutes of CPR, individual players certainly were praying too. One Bengals fan at the game scribbled ‘Pray for Buffalo #3 Hamlin’ on a paper sign. Minutes later, fans of both teams showed up at Hamlin’s hospital to pray. Players from around the league, fans, and others across social media offered prayers. We join them all in their prayers for his body and soul.

When tragedy occurs in this country, we often see communities rallying to pray for the victims. Prayer vigils are held, flowers are offered, and candles are lit as a way to demonstrate hope for positive outcomes. I’ve also been glad to hear from many in the media who have praised these displays for Damar Hamlin, who was not only a very good football player but also an honorable individual, who is close to his family and has formed a charitable foundation.

So why am I disconsolate?

At first, I was gratified to see so many demonstrations of support across the country, especially when I saw so many people engaged in them. I even went so far as speculating that maybe the response was so massive because there was more going on than I saw on the surface. Could people in this country, a country that has ridiculed and rejected anything resembling religion in general in the last several years, actually be realizing that prayers can make a difference? Was it possible that, aside from being reminded of their own mortality, they were beginning to believe that there was a role for prayer and maybe even religion in this country?

I began to realize that I am so desperate to live in a country that values religion and its tenets, its morality and blessings, that I will look for signs anywhere and everywhere to confirm my desires. That people coming together in community gatherings may be motivated by their own sense of isolation and that any opportunity to congregate provides relief from their loneliness. That many people would ironically claim that their prayers have little if anything to do with G-d or religion, but more to do with a “universal concern” for the healing of Damar Hamlin.

That rather than our experiencing a cultural transformation, we are witnessing a temporary, if satisfying, display of concern and wishes for good outcomes. Besides, the prayers can’t hurt.

And yet. And yet.

I can’t give up my hope that maybe, just maybe, a tiny seed has been planted. That people will realize that prayer is not only powerful, but prayer on behalf of others can be transformative. That each person who has joined with others, lit a candle, and brought flowers will realize that these acts of compassion are part of a bigger plan in the cosmos, often beyond understanding but soul-filling, nonetheless.

So I simply can’t give up hope for the spiritual future of our country.

My prayers go out for the recovery of Damar Hamlin, for his family, as well as the healing of our nation.