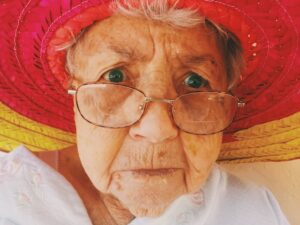 Not an actual photo of GLW. I never wear red.

Weirdly, I’m starting to see why people sometimes find me hard to be around. Have you hit that stage yet? It’s not fun. Oh, don’t get me wrong … I totally agree with my own assessment of my increasingly curmudgeonly temperament. I think the term curmudgeon is only for guys, but humor me. It fits. The problem, as I’ve been made painfully aware, is self-evident. That’s not the not-fun part.

The not-fun part is that I am in the out-of-body stage of my process in dealing with this unpleasant personality trait. Meaning, I watch myself in full cranky-butt mode without any ability to dial it back except to escape to an empty room and think on my sins. Which is also not-fun, but at least I’m not annoying anyone else while I’m adding up the counts for each offense.

Today I went to the gym. Oh, I forgot. Add two more counts to the “persons loitering at the gym” offense. Anyway, one of the trainers there, Wardell, asked me if I’d made any New Year resolutions. I gave him an unwarranted snark-toned answer.

He tilted his head and squinted his eyes. He’s no dummy.

“Just taking it a day at a time. Good to see you.”

And I walked off and down the stairs and left the building and immediately tried to break into a car that was not my own.

It’s the second time it’s happened. I have a new SUV, and it looks like every other grey SUV on the road. Some guy across the parking lot started laughing.

P.S. On an unrelated topic, please pray for Damar Hamlin. It feels like this is something pivotal, a God-movement in the making, a long-missed display of unity in love, and prayers without ceasing from millions of people. He hears yours, so please take a moment to think on Damar, a young man with good character who has inspired many … and I venture to say that most of them don’t even realize why.

The young man has Christ in him.