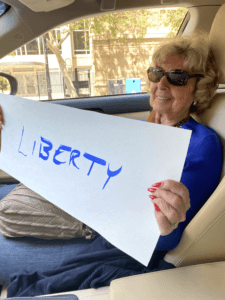 My cell phone rang at 5:15 a.m. A call at that time bodes ill. And ill it was, as was expected. “Mrs Rodin’s mother has passed,” was the message from the nurse at the memory care facility. She had gone into hospice care just five days ago.

The decision to enroll her in hospice was complicated: Two days before Christmas, Mrs Rodin’s mother had been found on the floor of her room three times in the night. The nurses were concerned that she might be dehydrated; she had a low fever. They wanted her to be checked out at the Emergency Room. They gave us a choice of picking her up and taking her ourselves, or having her transported by ambulance. Knowing that she would be attended to more quickly if she arrived by ambulance, I directed that they call one.

The Emergency Room experience was horrid. It wasn’t the staff’s fault in particular. Priorities have to be made. But Mrs Rodin’s mother was very cold, confused, and highly sensitive to pressure and pain. It always takes longer to check things out when there is nothing obviously wrong. Lab work and x-rays were done, taken. Results were eventually read. A small infection, but no bone breakage, dehydration, or bloodwork abnormalities. Six hours of agony with nothing to show for it that could not have been dealt with at the memory care residence.

And so it was that Mrs Rodin and I were determined to find a way to keep her mother from another Emergency Room experience absent a severe emergency. I did not fault the memory care staff. They have their procedures. If they needed a waiver of liability, all well and good. The Nurse Practitioner had a scheduled visit the following Tuesday. I made arrangements to meet with her to discuss the care plan going forward.

I made an appointment with the hospice organization that the Nurse Practitioner recommended. I looked up online what I could find about hospice for dementia patients. I discovered it was not straightforward. There were a series of observations that needed to be made and evaluated in combination. Yes, there were some extreme conditions that were clear, but there were also some combinations that were less clear about whether a dementia patient would likely die within the next six months. And there were provisions for re-certifying impending death in the event the patient did not, in fact, die within the six-month window after entering hospice care.

I examined the criteria again against my own observations of Mrs Rodin’s mother’s condition. Did she really have that? Was her cognitive decline that advanced? What does that term really mean? I remained firmly convinced that Mrs Rodin’s mother should not go through any more Emergency Room experiences that she had just experienced; the cost/benefit was decidedly on the cost side absent treating an extremely painful injury. Mrs Rodin’s mother was 92 years old, she had been diagnosed with a terminal illness of unknown duration. If she had less than six months to live, why should she undergo the torture of cold and pain? Few people seem to have the kind of empathy that lets them really see into the discomfort of the extremely aged and infirm. I can’t imagine feeling as cold while indoors and at least partially clothed and thinly blanketed as I would outdoors naked in an icy, damp, chill wind. But I could see that feeling in Mrs Rodin’s mother at the Emergency Room, with all too brief respites when a freshly autoclaved blanket was delivered and before it lost its warmth.

All my uncertainty would have been immediately eliminated if I had been attuned to “Dr Buster’s diagnosis.” Buster is our 10-year-old Yorkshire terrier. He loves everybody and can’t get enough attention from anyone. When she lived in our home, Mrs Rodin’s mother loved to hold Buster and he loved to be held by her. And so it was that on the Monday evening before Christmas, we thought it would be nice to take Buster along as we went to collect Mrs Rodin’s mother and tour a neighborhood known for its elaborate Christmas light display. As soon as we got her settled in the back seat of the car, as expected, Buster sprung to her lap, got in her face, and licked her. But then, surprisingly, he leapt off and would not have anything to do with her the rest of the trip. Mrs Rodin didn’t say anything, but the thought crept into her head that Buster knew something we didn’t. And, as it turns out, he did.