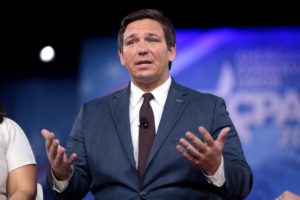 The transgender activists must be getting desperate. They are more determined than ever to set up our kids for a lifetime of despair and confusion by pushing transgenderism on them. Fortunately, Gov. Ron DeSantis has acted once again to stymie their agenda, and they feel compelled to attack anyone remotely connected to him.

The latest volley in the transgender wars occurred when Gov. DeSantis made two new appointments to the Florida Board of Medicine:

Gov. Ron DeSantis continues to reshape important medical boards that are a key component of his push to limit gender-affirming care, especially for minors.

His latest appointments are drawing fire from critics who contend the new appointees are being put in place to keep pushing ahead with a ‘transphobic’ agenda.

DeSantis this week appointed two doctors to the Board of Medicine, both of whom have weighed in on the debate over the types of treatment offered to minors. The Board of Medicine agreed in November to alter the standard-of-care rules to ban doctors from performing gender-confirming surgeries on anyone under 18 and from supplying puberty blockers and hormones to anyone under 18.

DeSantis appointed Gregory Coffman, a pediatrician at Orlando Health Physician Associates, and Matthew Benson, a pediatric endocrinologist at Nemours Children’s Health to the Board of Medicine.

These aren’t a couple of slouches who’ve been appointed. But of course, the activists have decided they must be defamed, so they accused them of being supporters of “conversion therapy,” which for many people contains the dark definition of a religious and (some would say an ineffective) therapy. I found this Merriam-Webster definition of conversion therapy:

NOTE: Conversion therapy is generally regarded as having no scientific basis and as being both ineffective and harmful.

Conversion therapy is both pointless and painful. At its best, it can inflict considerable psychological damage on a child without changing their sexual orientation or gender identity whatsoever. At its worst, it can lead to suicide …—Samantha Allen

Sounds pretty ominous, doesn’t it? I don’t know how effective conversion therapy is, but hidden in the details of this article is that Dr. Benson did not show support for conversion therapy; he recommended exploratory psychodynamic therapy:

Benson also signed an open letter to the Florida Board of Medicine supporting ‘exploratory psychodynamic therapy,’ otherwise known as conversion therapy, for transgender and gender-nonconforming youth.

That letter was cosigned by Dr. Monica Mortensen, a Jacksonville pediatric endocrinologist who DeSantis appointed to the state board of osteopathic medicine on Dec. 6.

And what, you may ask, is exploratory psychodynamic therapy? Columbia University Irving Medical Center defines it in this manner:

This kind of article, on a subject that is so controversial and sensitive, is unconscionable. We are talking about our children, their lives, and their futures. If the subject of transgenderism comes up, which is likely to happen given the pre-occupation with the topic on social media, why aren’t moral, responsible and compassionate steps embraced by those in charge without the law stepping in? Why aren’t the parents contacted? Why isn’t therapy recommended? Do we really care about the mental state of these kids, or about brainwashing children into an ill-defined and life-changing topic that we still know little about?

As mentioned earlier, Florida passed legislation in November to protect our kids from these activists, but they persist in their agenda:

‘These rules, as written, put transgender youth at higher risk of depression, anxiety, and suicidality,’ Nikole Parker, Equality Florida Director of Transgender Equality, said after the November vote on the new rules. ‘Those are the facts purposely ignored by a Board of Medicine stacked with DeSantis political appointees who have put their toxic politics over people’s health and well-being.’

Ms. Parker’s “facts” have been shown to be questionable, at best.

Thank G-d for Gov. DeSantis and those in the medical community who stand by him.

Let’s hope the other states are taking notes!