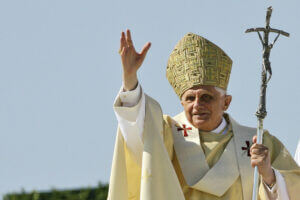 Pope Benedict XVI has passed away in his 95th year. From Catholic World Report:

Joseph Ratzinger was born on April 16, 1927, Holy Saturday, in the Bavarian town of Marktl am Inn. His parents, Joseph and Maria, raised him in the Catholic faith. His father — a member of a traditional Bavarian family of farmers — served as a police officer. Joseph senior was, however, such a fierce opponent of the Nazis that the family had to relocate to Traunstein, a small town on the Austrian border.

Joseph and his older siblings, Georg and Maria, thus grew up during the rise of the Nazis in Germany, which he would later call “a sinister regime” that “banished God and thus became impervious to anything true and good.” He was conscripted into the military’s auxiliary anti-aircraft service in the final months of World War II, deserted, and spent a brief time in an American prisoner-of-war camp.

Here is the entire article from Catholic World Report.